Water Supply Shortage: Labella mulls dismissal of members of the MCWD Board of Directors 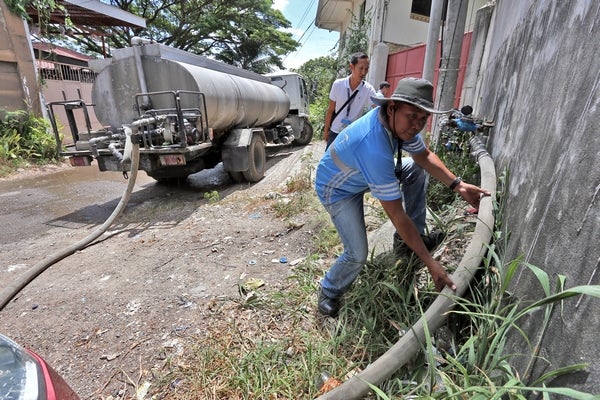 The summer months have long ended, but Cebuanos continue to suffer from lack of water supply. CDN PHOTO/JUNJIE MENDOZA

CEBU CITY, Philippines — Cebu City Mayor Edgardo Labella has joined members of the Cebu City Council in expressing his  disappointment on the failure of the Metropolitan Cebu Water District (MCWD) to live up to its mandate of providing Cebuanos with enough potable water supply.

As chief executive, Labella said that he has the authority and the prerogative to order the dismissal of the five MCWD board members including its chairman Joel Mari Yu, if they do not shape up.

This exercise of power is provided in Section 3 (b) of Presidential Decree 198 or the Provincial Water Utilities Act of 1973 which states that the chief executive of the Local Government Unit where 70 percent of the active water service connections come from has the authority appoint members of the board of the local water district.

The MCWD franchise area covers the cities of Cebu, Mandaue, Lapu-Lapu, and Talisay and the municipalities of Liloan, Cordova, and Consolacion.

A big part of MCWD’s service area suffered low to no water pressure during the summer months.  The problem continues to affect water consumers to date.

Labella, a resident of Barangay Mabolo, said that he too is experiencing water supply shortage.

“I sent a letter expressing my disgust (to the MCWD board) because of the so many complaints (that I have been getting). I have my own experience of waterless days. I will study what I can do in accordance with the PD 198,” the mayor said.

Labella, who is also a lawyer, said that he wanted to look into the extent of the power granted on members of the MCWD board. He also wanted to know if he can have them sanctioned or replaced from service because of their inefficiency.

But section 11 of PD 198 says that members of the board of directors are tenured and cannot easily be dismissed from service.  This means that each of the board members are allowed to serve for a period ranging from two to six years.  The duration of their service does not end with the term of their appointing officers.

Four of the five board members were appointed by former mayor Tomas Osmeña shortly after he won his election in 2016 while the fifth one, lawyer and former City Councilor Procopio Fernandez, was appointed shortly before then Mayor Michael Rama vacated the office of the mayor on the same year. Osmeña replaced Rama at City Hall in 2016.

“I will check that out. As a public official, I will always adhere to the presumption of regularity. If there is such, I have to respect the appointing process. But if it reaches to a point that they are no longer doing their job in spite of the concerns raised, we will have to act accordingly,” said Labella.

The mayor warned MCWD Board Members the city government will have to intervene if they continue to fail in providing the best quality service that Cebuanos deserve.

Labella said that MCWD should have also sought the city government’s help before their water supply problem started to worsen.

“If there’s really a need (for help), why only (ask) now? They should have sounded that up long before. It is only now when there are complaints that they are asking our help,” said Labella. / dcb