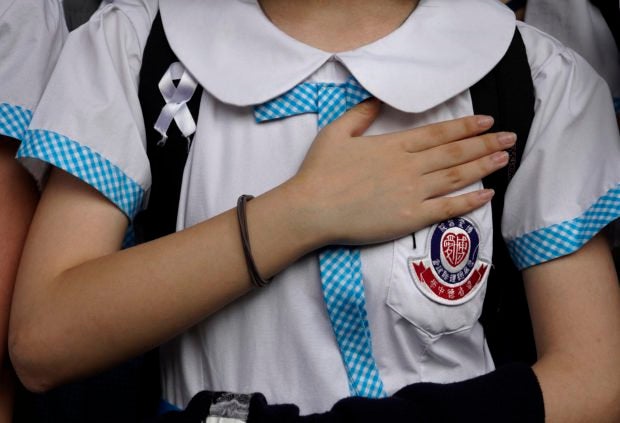 A student out her hand on the chest during a strike in Hong Kong, Wednesday, Oct. 2, 2019. Hundreds of students at a Hong Kong college have staged a strike to condemn police shooting of a teenager during widespread violence in the semi-autonomous Chinese territory at pre-democracy protests that marred China’s National Day. (AP Photo/Vincent Yu)

HONG KONG — Heads bowed and dressed in black, schoolmates of a teenage demonstrator shot at close range in the chest by a Hong Kong riot officer condemned police tactics and demanded accountability on Wednesday.

Tuesday’s shooting – during widespread anti-government demonstrations on China’s National Day – marked a fearsome escalation in Hong Kong’s protest violence. The 18-year-old is the first known victim of police gunfire since the protests began in June. His condition in the hospital was described Wednesday by the government as stable.

The officer fired as the protester struck him with a metal rod. His use of lethal weaponry is sure to inflame widespread public anger about police tactics during the crisis, widely condemned as heavy-handed.

Having repeatedly viewed a video of the shooting, Mo said: “The sensible police response should have been using a police baton or pepper spray, etcetera, to fight back. It wasn’t exactly an extreme situation and the use of a live bullet simply cannot be justified.”

Several hundred people, including students, protested with quiet fury at the wounded demonstrator’s school in the Tsuen Wan district of Hong Kong on Wednesday morning.

Sitting crossed-legged, some held an arm across their chest to below their left shoulder – the location of the teenager’s gunshot wound. One held a hand-written message condemning “thug police.”

“When we go to fight, we are always the egg and they are the wall,” said a student who gave only his surname, Wong. “We are just bullied by them.”

The police chief defended the officer’s use of force. Commissioner Stephen Lo said late Tuesday night that the officer had feared for his life and made “a split-second” to fire with a single shot at close range.

“It was the attacker who decided to come so close,” Lo said. “He had no choice, he could only use the weapon that he had available.”

Lo said there is no order for police to shoot if they are under threat but they can use appropriate force. He described protesters as “rioters,” saying they have committed widespread criminal acts – from attacking police officers, including 25 who were injured, to destroying public property and vandalizing shops and banks linked to China.

“These turned out to be very dangerous riots,” Hong Kong’s government said in a statement Wednesday that described protesters who carried out widespread acts of vandalism as “the mob.”

It claimed rioting was “planned and organized” and called upon parents and teachers to help restrain young protesters.

“What the society does not want to see is students being stirred to break the law,” it said.

A video that spread quickly on social media appeared to show the officer opening fire as the masked teenager came at him with a metal rod, striking the officer’s shooting arm. Taken by the City University Student Union, it showed a dozen black-clad protesters throwing objects at police and closing in on the lone officer who pointed his gun and opened fire. The protester toppled backward onto the street, bleeding from below his left shoulder.

As another protester rushed in to try to drag away the wounded youth and was tackled by an officer, a gasoline bomb landed in the middle of the group of officers in an explosion of flames.

Chanting anti-China slogans and “Freedom for Hong Kong,” tens of thousands of peaceful marchers dressed in mournful black also demonstrated along a broad thoroughfare downtown in defiance of a police ban. Organizers said that rally attracted at least 100,000 people. Police didn’t give an estimate. /kga