A look into some of Robert Andrew Hiyas’ jaw-dropping pieces 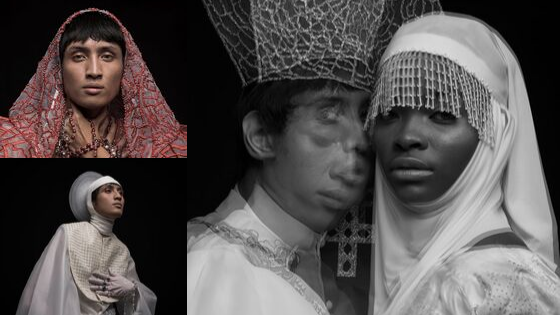 CEBU CITY, Philippines— Remember the young Cebuano fashion designer who wowed everyone with his “Trans/(f)igure” collection during the Bench Design Awards last September 1?

CDN Digital is given the chance to share with everyone a closer look into some of the pieces.

“Rob and I had this meeting weeks before the shoot. It was when he got back from Manila after the Bench Design Awards 2019. Robert was kind enough to explain to me in-depth on how he came up with his designs. Then we conceptualized on how the photos should look like. The photos show what Trans/(f)igure really mean and how Robert interrogates gender through this collection,” says Sison.

The photoshoot happened last September 28 and produced exquisite images that look like an editorial shoot out of an international magazine.

Hiyas also shares with CDN Digital through messenger the inspiration behind four of his top picks. This photo, Hiyas explains, is a tiered dress of pleated Jusi, depicting the practice of overlaying vestments for the Pope. The front opening is a depiction of the woven windows of confession cabinets found inside Catholic churches. Inspired by the Madonnas Hiyas’ always saw during processions back when he was a kid, this piece reflects just that. With a coat inspired by the conical shape of the ceremonial gowns of the Madonna, which is given a twist with Hiyas’ artistic embroidery. The last piece that Hiyas shares with CDN Digital is “a coat with sleeves inspired by a clerical figure in one of Heironymous Bosch’s paintings and an embellished collar inspired by the habit.”

“A painting depicting the passions of Christ is reflected in the lower front, left part of the coat,” adds Hiyas.

Hiyas, who has also been interviewed on CDN  Play,  says that before he designs his pieces, he makes sure that these works of art tell a story itself.

Hiyas is indeed blazing the trail for Cebuano young artists who are making waves not just locally but nationally.

We look forward to more collaboration between Robert and Garel soon! /dbs

Read Next
Kinds of teacher we often see in school