Abandoned bag with P2.7M shabu turned over to police by residents 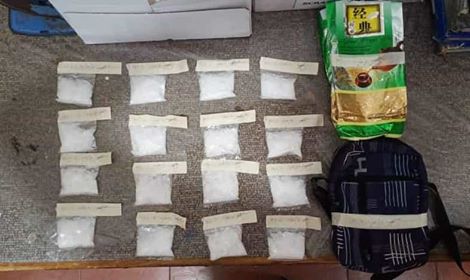 Police display the packs of at least P2.7 million worth of shabu that were found by residents abandoned on the road in Sikatuna Street, Barangay Zapatera, Cebu City at dawn on Saturday, October 5, 2019. |Parian Police Station photo

CEBU CITY, Philippines — At least P2.7 million worth of illegal drugs stuffed inside a bag was found abandoned along Sikatuna Street, Barangay Zapatera, Cebu City, at around 4 a.m. on Saturday, October 5, 2019 and turned over to the police by the group of men who found them.

Police Captain Armando Labora, Parian police chief, told CDN Digital that police officers were patrolling the area near Zapatera Elementary School when a group of men approached them and handed over a black sling bag filled with medium-sized sachets of suspected shabu.

Labora said the men found the bag just along the road and picked it up thinking there was money inside, but instead found white crystalline substance packed in sachets.

These men were headed to their station to turn over the items when the patrol car passed by. They immediately showed the items to the police.

The suspected shabu were packed in a medium sized transparent plastic sachets when the black sling bag was opened by the police from Parian Police station.

When police inventoried the bag’s content, it was found to contain drugs that weighed at least 400 grams, with an estimated value of about P2.7 million, he added.

“May gani dili adik ang mga naka pulot (We were thankful those who found it were not drug addicts),” said Labora.

Labora said they immediately turned over the drugs  to the Regional Crime Laboratory Office in Central Visayas (RCLO-7) in Sitio Sudlon, Barangay Lahug, Cebu City, and received the confirmation today, October 6, that it was indeed illegal drugs./elb

Read Next
3 minors who escaped from Operation Second Chance are found; 8 others still to be rescued