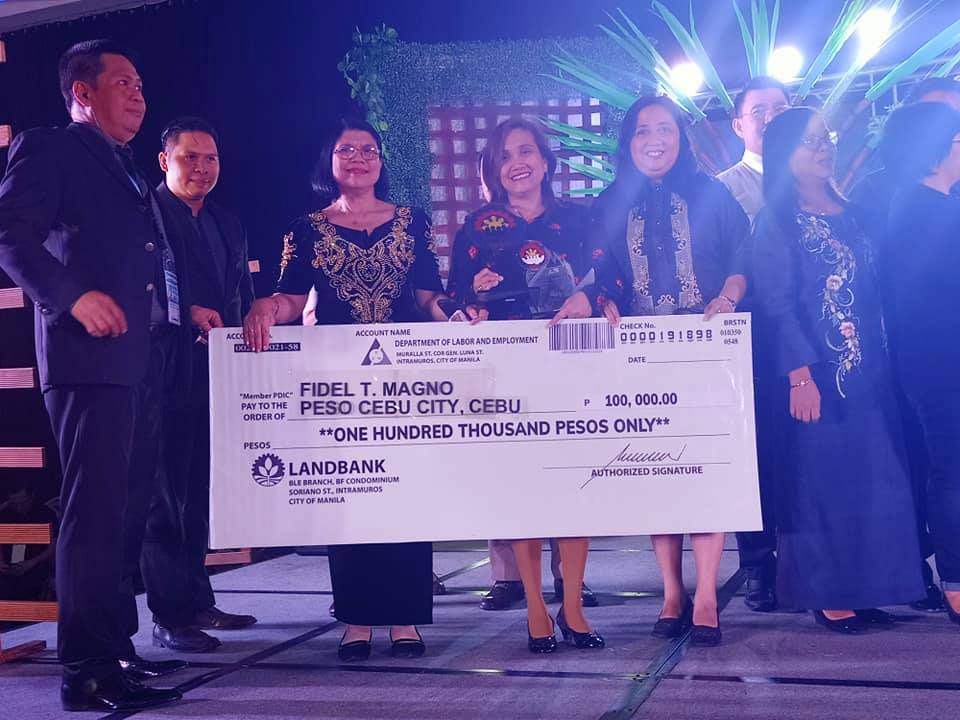 Salome Siaton, regional director of the Department of Labor and Employment in Central Visayas, and the rest of the DOLE-7 team accepts the National Best Peso award on behalf PESO Cebu City and its then manager Fidel Magno. | DOLE-7 photo

According to a press statement from the Department of Labor and Employment in Central Visayas (DOLE-7), Cebu City DMDP or PESO-Cebu City, along with PESO-Olongapo City and PESO-Valenzuela City, was one of the national winners in a triple tie under the Highly Urbanized City category.

The first time was in 2016 during the 2016 National PESO Congress hosted by Cebu Province.

“We were hopeful that for this year, at least one of Region-7’s contenders to the national search would take home the most prestigious award. And PESO-Cebu City making it as one of the National Best PESOs definitely made us very proud,” said DOLE-7 regional director Salome Siaton.

Siaton headed the team from Region-7 who received the award on behalf of PESO-Cebu City’s then PESO manager Fidel Magno.

All PESOs bagging awards this year underwent extensive and tedious screening process of their 2018 accomplishments, said Siaton, who lauded the efforts of the whole PESO-Cebu City Team, most especially Magno’s leadership.

Another award was conferred to Region-7, the National Award for Best PESO User and Advocate of PEIS, granted to PESO-Negros Oriental under the 1st Class Province Category.

The PhilJobnet is an automated job and applicant matching system which aims to fast-track jobseekers search for jobs and employers search for manpower. It can be accessed thru https://www.philjobnet.gov.ph//.

On the other hand, the PEIS is the enhanced version of the Skills Registry System, which is a database of active manpower supply containing the profiles of all persons and employers registered under the National Skills Registration Program (NSRP). This program, initiated by the Department of Labor and Employment (DOLE), aims to maintain a continuing nationwide skills registry through its Skills Registry System (SRS) database.

The 19th National PESO Congress is spearheaded by the PESO Managers Association of the Philippines Inc., in collaboration with the Bureau of Local Employment (BLE) and the DOLE Regional Office No. VI as the host. /bmjo