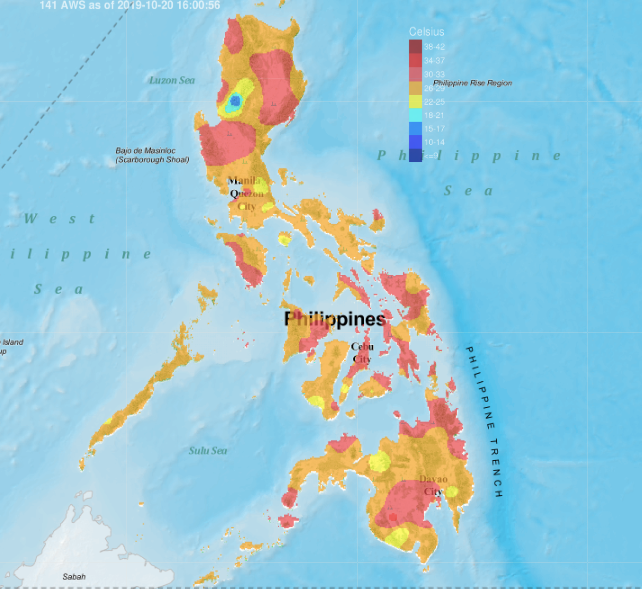 In Pagasa’s temperature contour map of the Philippines as of 4 p.m. today, October 20, most of the northern part of Cebu is shaded light red, meaning the temperature ranges between 30 to 33 degrees Celsius. (Screengrab from bagong.pagasa.dost.gov.ph)

CEBU CITY, Philippines — Metro Cebu will have a warm week ahead as Typhoon “Perla” is expected to exit the Philippine Area of Responsibility between tonight, October 20, and Monday dawn, October 21.

Jhomer Eclarino, a weather specialist in the Mactan Station of the Philippine Atmospheric Geophysical and Astronomical Services Administration (Pagasa), said the surface temperature in the next five days might climb up to 33 degrees Celsius.

The heat index or the temperature actually felt by the human body, Eclarino said, might reach up to 39 degrees.

(We will experience a generally warm weather from morning until the afternoon. We may have occasional isolated rainshowers due to localized thunderstorms.)

In the 4 p.m. temperature contour map of Pagasa today, October 20, most of the northern part of Cebu is shaded light red. This means that the temperature ranges from 30 to 33 degrees Celsius.

Meanwhile, the state weather bureau said Typhoon Perla is around 890 kilometers east northeast of Basco, Batanes. It continues to move northeast at 30 kilometers per hour with maximum sustained winds of 140 kph and gustiness of up to 160 kph. 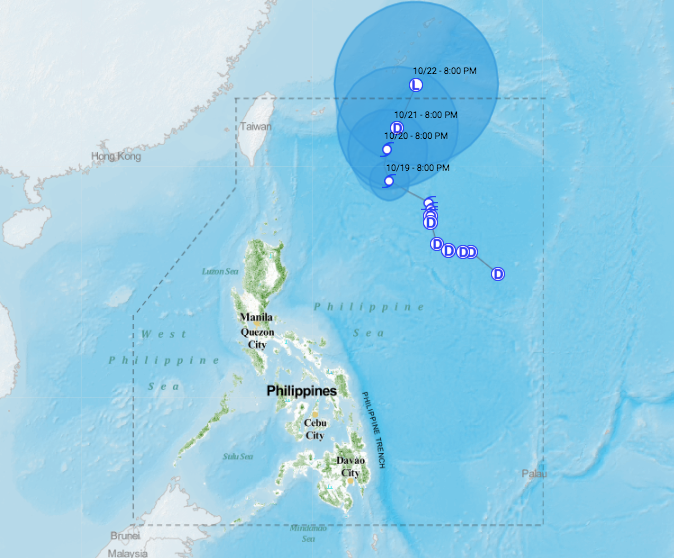 The forecast track of Typhoon Perla as it exits the Philippine Area of Responsibility (PAR)on Sunday, October 20, 2019. (Screengrab from bagong.pagasa.dost.gov.ph at 4 p.m. today, October 20.)

Eclarino said that although they were monitoring a Severe Tropical Storm “Bualoi” (international name) outside the PAR, it would less likely to affect the region.

Bualoi is currently at around 2,695 kilometers east of the Visayas islands and is moving west-northwest at 20 kph with maximum sustained winds of 100 kph and gustiness of 125 kph./dbs