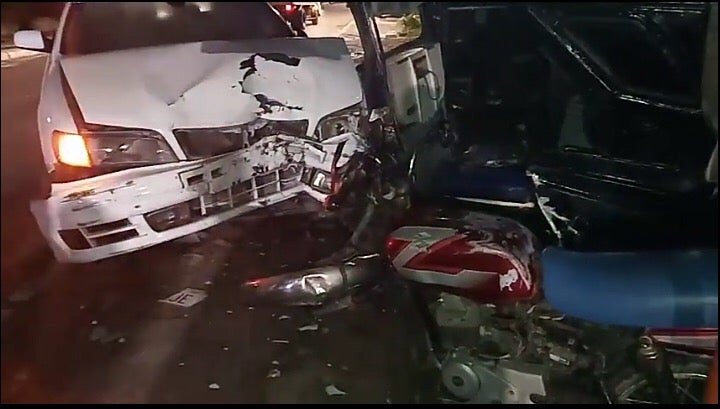 Lapu-Lapu City, Cebu—A tricycle driver and his passenger were hurt after the tricycle they were in was hit head on by a car driven by a Korean national at around 4 a.m. on Tuesday, October 22, 2019, in Sitio Kadulang, Barangay Marigondon, here.

The woman passenger was identified as Shiela Mae Dela Pieza, 23, from the said village. She hurt both her legs and sustained bruises and cuts.

The tricycle driver, on the other hand, was identified as Rodel Caballa, of legal age, a resident of Cordova town.

Only the woman passenger was brought to a hospital in Lapu-Lapu.

The car driver was identified by the police as Soon Kyu Young, 46, residing at St. Martin’s Village in Barangay Banilad, Cebu City.  He was with another korean national at the passenger side whom the police did not name.

Police said both the driver and the passenger of the white sedan were drunk as they admitted to have come from a beer house in the Lapu-Lapu City area.

They were both held by Marigondon police for further investigation and filing of appropriate charges.

Police Staff Sargeant Roger Salinbot said that the victims him they were traveling along a road in Sitio Kadulang when they were surprised to see a white car from the opposite lane heading towards their direction.

The car eventually hit them head on, causing damage to both parties. /bmjo