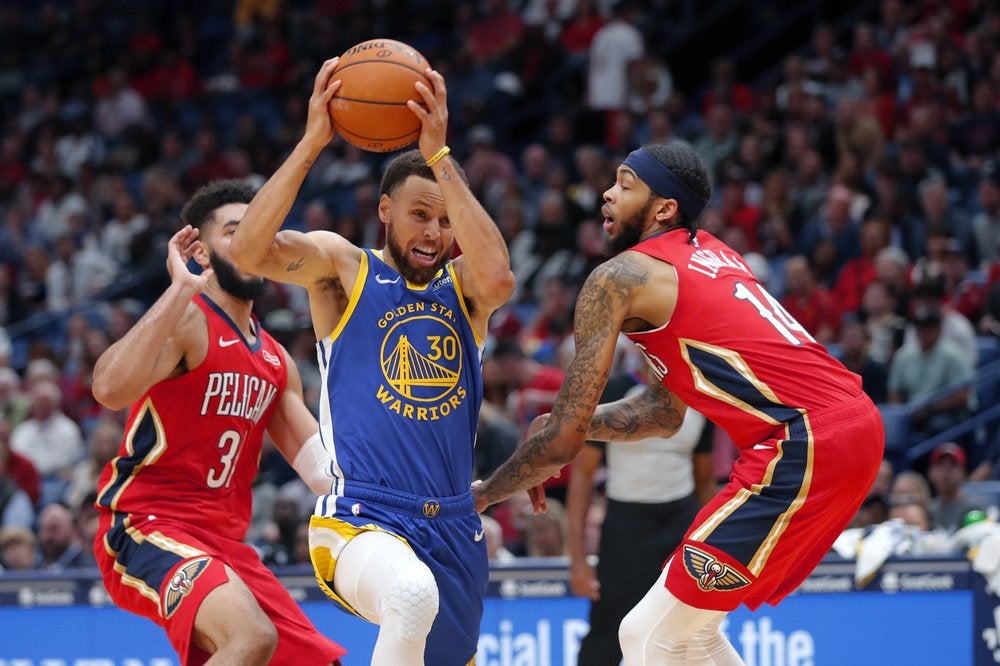 Or for anyone who was part of the once-dominant Golden State group that reached five straight NBA Finals.

The mistakes are magnified at this early stage, and even Curry has had his share. Not that he takes time to listen to critics at the moment — he’s focused on bringing this team together fast after a tough start.

“Everybody loves to label you when you’re down, that’s easy,” Curry said. ”… Throw darts at a team that’s trying to figure it out based on how much success we’ve had. I hope people decide to see through that and understand what we’re about and what we’re going to build toward.”

An up-tempo offense that had become second nature, with players trusting one another to be in the right spots or anticipate teammates’ tendencies, is not yet operating that way.

“That will come with time,” Curry said. “It’s hard to rush that.”

The opening losses were truly forgettable. The Warriors were so bad in their 141-122 loss to the Clippers in the opener that fans headed for the exits early, a bad look for the first game at new Chase Center last Thursday. Then, Golden State fell behind 70-37 at halftime in a 120-92 loss at Oklahoma City on Sunday while shooting just 27.5 percent over the initial two quarters.

These Warriors are still going to score their share of points, even without the injured Klay Thompson, but with the addition of D’Angelo Russell. Stopping the other team has been a problem.

Green called the defense “atrocious” and “pathetic” after the rout by L.A.

Kerr considers what happened against the Clippers more the “reality” of the NBA with hard-fought games night in and night out.

But for Curry and Co., winning had become the norm with everyone else chasing Golden State.

With nine players age 23 or younger, these Warriors are a far cry from what they have been. Gone is two-time NBA Finals MVP Kevin Durant, along with key veterans Andre Iguodala and Shaun Livingston. Thompson is recovering from a July 2 surgery for a torn ACL in his left knee and might miss the entire season.

“Losing stinks. It’s no fun,” Kerr said. “This is more of the reality of the NBA. The last five years we’ve been living in a world that isn’t supposed to exist. Five years basically, record-wise the best stretch anybody has had over five years. This is reality. Nine guys that are 23 and under — we are starting over in many respects. We’ve got to be patient, we’ve got to fight, continue to teach and the players have to absorb and learn. We’ll get better, I know that.”

Curry is challenging all his teammates to attack on each possession until things begin clicking more regularly.

“I think we have to err on the side of being more organized and more calculated early in the season and hopefully we can have those (positive) moments,” Curry said, referring to a time when the offense gets flowing and the Warriors pressure the defense.

Curry noted it would be easy to just brush off the Clippers loss as one game in a long schedule, the first of 82.

He didn’t approach it that way.

“It all about perspective. It is not a good feeling at all, especially when you’re opening up in a new building,” Curry said.

Shortly after Durant announced his departure to join the Brooklyn Nets, Curry acknowledged this season would be different. Having been on both ends of winning and losing in his first 10 seasons, he is embracing the challenge as the Warriors’ oldest player at age 31.

The Warriors are fully aware many have already ruled them out in the powerful Western Conference given all the change. They don’t care. That just adds fuel.

Still, you won’t hear any excuses from Green. That’s not his tell-it-like-it-is style, expletives included.

“You’ve got no choice but to be patient. You can’t really speed the process up. The only thing that really helps with that is experience,” he said.