CEBU CITY, Philippines — He onced lived under the moniker “super cop” for running after criminals in this part of the country.

But there was nothing “super” or grand in Senior Police Officer 1 Adonis Dumpit’s grave at the Saint Felipe apartments of the Carreta Catholic Cemetery on November 2, All Souls’ Day.

A flower arrangement of white, pink and red blooms brought colors to his gray grave.

But there was no indication that the man, whose body lies in an apartment-type niche, once held a powerful position in Cebu City.

READ: FROM SUPER COP TO ‘NARCO-COP’

A man lit candles for him when CDN Digital visited Dumpit’s grave on November 1, All Saints’ Day.

Ask who he is, the man said he used to be under Dumpit’s wing when the police officer was still alive.

Controversial but favored by then Cebu City Mayor Tomas Osmeña, Dumpit enjoyed the privilege of being a powerful figure when he led Hunter’s Team, a task force formed by Osmeña in 2004 to battle criminality.

But on June 27, 2018, after staying away from the limelight, Dumpit was intercepted by operatives of the National Bureau of Investigation (NBI) along F. Dagohoy Circumferential Road in Purok 1, Barangay San Isidro in Tagbilaran City, Bohol province where he was killed in what was described as an anti-illegal drug operation.

He died 200 meters away from his house in the same barangay where he lived with his common-law wife and 13 adopted children.

But when Dumpit died, it was his ex-wife, Josephine, who had been in touch with the NBI.

All throughout the frenzy that ensued after Dumpit’s death, Josephine, whose marriage to the controversial cop was annulled in 2008, says their quest for justice has not moved even an inch forward.

It has been one year, four months, and five days after Dumpit’s death.

“I have been asking them even for just a copy of the spot report. I went to NBI Bohol several times but they keep on passing me around,” Josephine told CDN Digital  in an exclusive interview.

Josephine, who has a son named Norman Vincent with the slain cop, said that her ex-husband was not involved in the illegal drug trade.

She said the NBI just kept telling them that the investigation is still ongoing.

“They even used the name of President Rodrigo Duterte in their replies to my letters,” Josephine said.

On All Souls’ Day, November 2, Josephine said her prayer is that Dumpit will help them earn “what is due for him.”

Although Dumpit’s marriage with Josephine has been annulled in 2008, Dumpit has not changed his marital status in his records with the Philippine National Police (PNP).

He retained Josephine’s name as his spouse. Maria Ella Amores (in white shirt), common-law wife of the late SPO1 Adonis Dumpit, and their eight adopted children light
candles and offer flowers at the niche of the controversial police officer inside the Carreta Public Cemetery in this 2018 CDN file photo.

Maria Elena Amores, Dumpit’s common-law wife, and their adopted children previously said that they have lifted to God their call for justice for Dumpit’s death.

Due to the drug involvement allegations against Dumpit, the cop was stripped off funeral honors.

His family was not able get the benefits accorded to police officers except for the monetary equivalent to his unused leave credits.

READ: NO HONORS FOR DUMPIT

Josephine said they already claimed the insurance policy of the slain cop in December 2018.

She said they are still processing the papers to claim her ex-husband’s leave credits conversion.

For Josephine, Dumpit deserves a more decent resting place than the apartment-type niche his body is in.

She said Dumpit deserves it to honor what could have been his 20 years in police service.

At the height of Dumpit’s death, former mayor Osmeña promised to shoulder the funeral expenses and the burial of the controversial cop, who used to be his close-in aide.

But during the CDN Digital interview, Josephine revealed that it was her, not the former mayor, who paid for the entire funeral expenses of Dumpit.

The receipts from the funeral parlor in Cebu City where his wake was held and the funeral services in Bohol, which first prepared Dumpit’s body, all bore Josephine’s name as the payor.

(Ma’am, please help us because the city did not pay us for the funeral services.)

She fully paid the funeral home on December 21, 2018 when they got his insurance.

Josephine said she could have brought Dumpit to a funeral home that  she could afford had Osmeña not promised to shoulder the expenses.

She said it was Osmeña’s staff who directed them to hold the wake at Cosmopolitan Funeral Homes on Junquera Street. 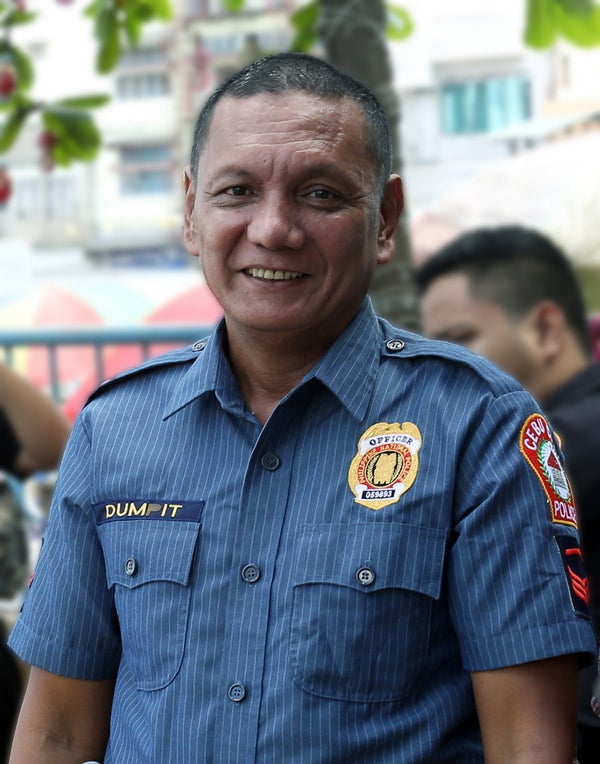 The late SPO1 Adonis Dumpit will remain in the history as one of Cebu City’s most controversial cops. | CDN File Photo

In a message to CDN Digital, Osmeña said he never got the billing for Dumpit’s funeral services.

“I never got a bill for that but I gave Josephine a job for over six years and bailed out Adonis for several hundred thousands,” Osmeña said.

In 2016, Osmeña paid the P250,000 bail bond for Dumpit, who was then facing criminal charges for the death of a minor robbery suspect.

Josephine used to work at the Cebu City Treasurer’s Office when Osmeña was mayor.

Osmeña also pointed out that Dumpit was already living with his second family at the time of his death.

The former mayor said he was assisting Dumpit and his second family during this time.

“At the time of his death, Adonis was living with his second family (in Bohol). He was squatting on a GSIS property. He couldn’t even pay three months of electricity bill at P4, 000 a month yet the police claimed he was a high-level pusher. I also paid P30,000 balance on his multicab,” Osmeña said. / celr