Quiboloy says he must be thanked for stopping Mindanao quake 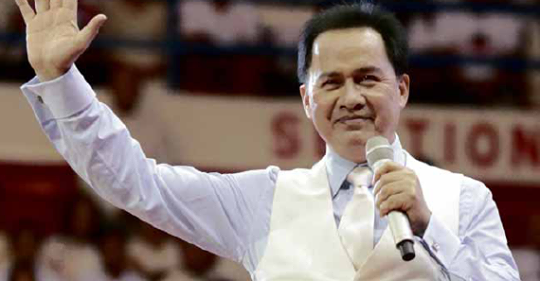 MANILA, Philippines — Pastor Apollo Quiboloy, the self-declared “Appointed Son of God”, has said that people should thank him for stopping Tuesday’s 6.6-magnitude earthquake, which rocked North Cotabato and nearby provinces.

The powerful tremor left at least 8 people dead and nearly 400 others injured.

In a video shared by Youtube user Vergel Cabero on Thursday, Quiboloy said he “yelled” at the quake to stop – and it did.

“Noong lumindol ng 6.6 (magnitude), nandoon ako kahapon, nandoon ako sa kwarto ko, sabi ko ‘lindol stop, umi-stop’ (When the 6.6-magnitude quake hit, I was in my room, and I told it stop, and it did),” Quiboloy said in the video.

“Pasalamat kayo sa akin kasi kung hindi ko pina-stop ‘yun, marami kayong magigiba diyan, mamamatay kayo (You should thank me for stopping the earthquake because otherwise many of you will be dead),” he added.

According to him, there were witnesses when he ordered the earthquake to stop. He further claimed “yung pangalawa ganun din,” likely referring to another earthquake that followed.

His audience cheered and clapped at the pastor’s pronouncements, some even uttered: “Amen!”

Quiboloy is a televangelist and founder of the homegrown Christian sect Kingdom of Jesus Christ, the Name Above Every Name or KJC, based in Davao.

READ: IN THE KNOW: Who is Apollo Quiboloy?

He is also a known ally of President Rodrigo Duterte. In 2016, then-Davao City mayor Duterte admitted he received gifts such as properties and cars from the pastor. /kga