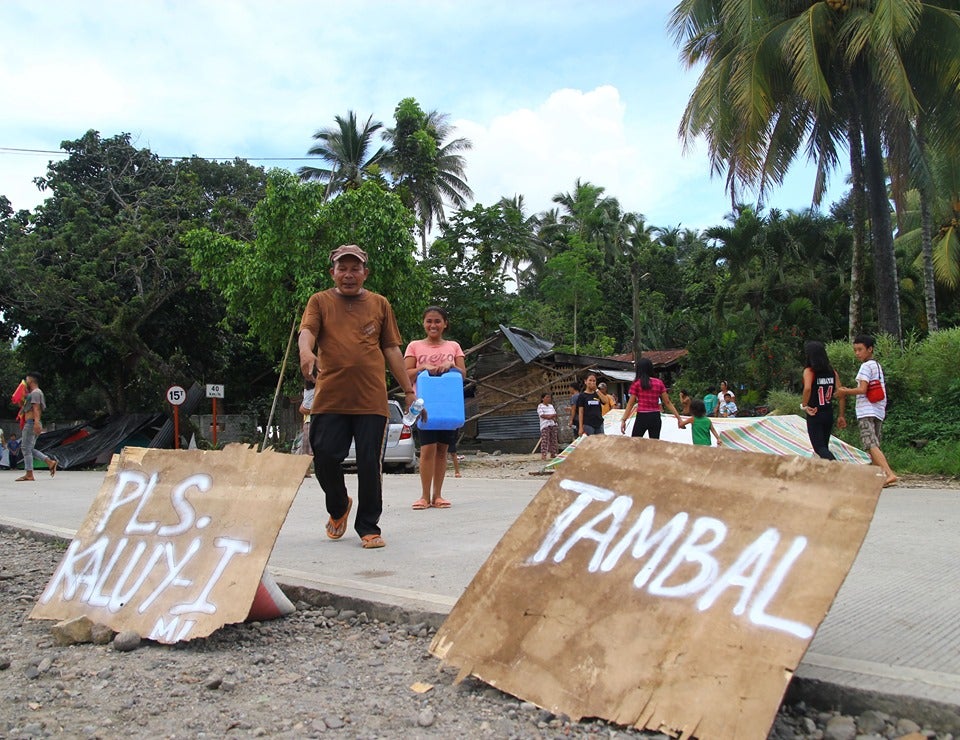 An appeal for medicines by an earthquake victim placed along a highway on Friday, Nov. 1, 2019 in Makilala, North Cotabato, one of the worst affected areas of the 6.5 magnitude quake that hit the province on Oct. 31, 2019. | Photo by Gigi Bueno/Mindanews

CAGAYAN DE ORO CITY, Philippines —  Death came for a farmer in a scramble over a relief item amid desperate calls for help, food and medicines from earthquake-stricken residents, which were written in cardboards and on the pavement that littered the highway in Makilala, North Cotabato on Saturday, November 2, 2019.

The desperation led to the death of a 22-year-old farmer, who was stabbed to death Saturday after residents started become unruly as relief convoys arrived to deliver food and tarpaulins.

Barangay Captain Napoleon Inggo of Indangan, Makilala, said Eric Magtango stabbed his neighbor, a certain Michael, over an argument as to who gets the last tarpaulin.

Inggo said tarpaulins are among the most desired items among the residents because it can be used as tents. 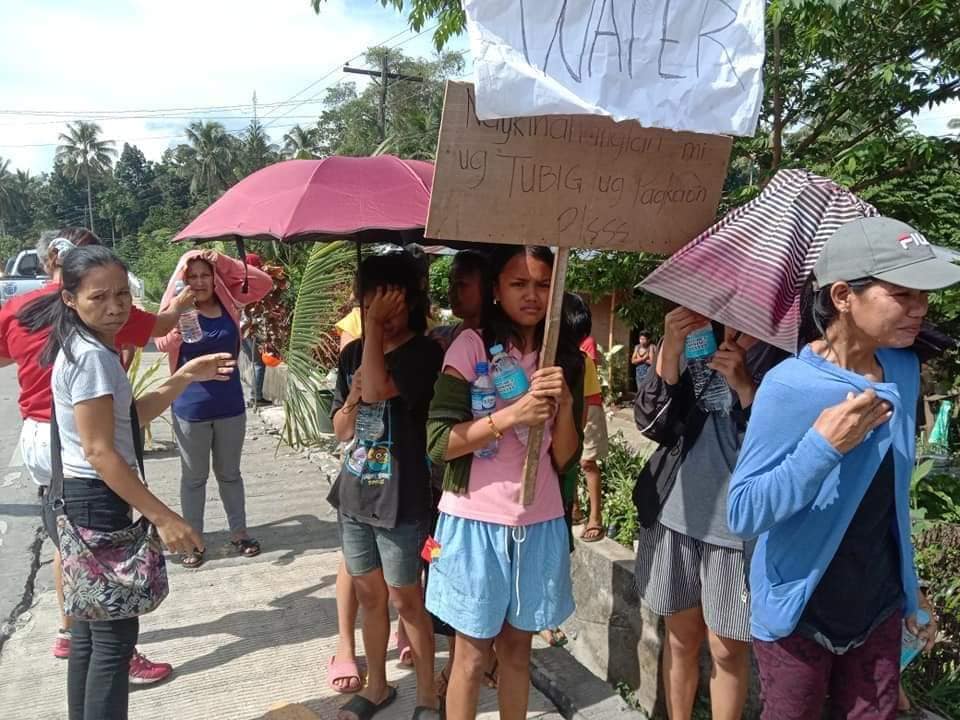 Appeal for water by earthquake victims of Makilala, North Cotabato along the town’s highway in this photos taken on Nov. 1, 2019. |Photos courtesy of Jeed Salarda 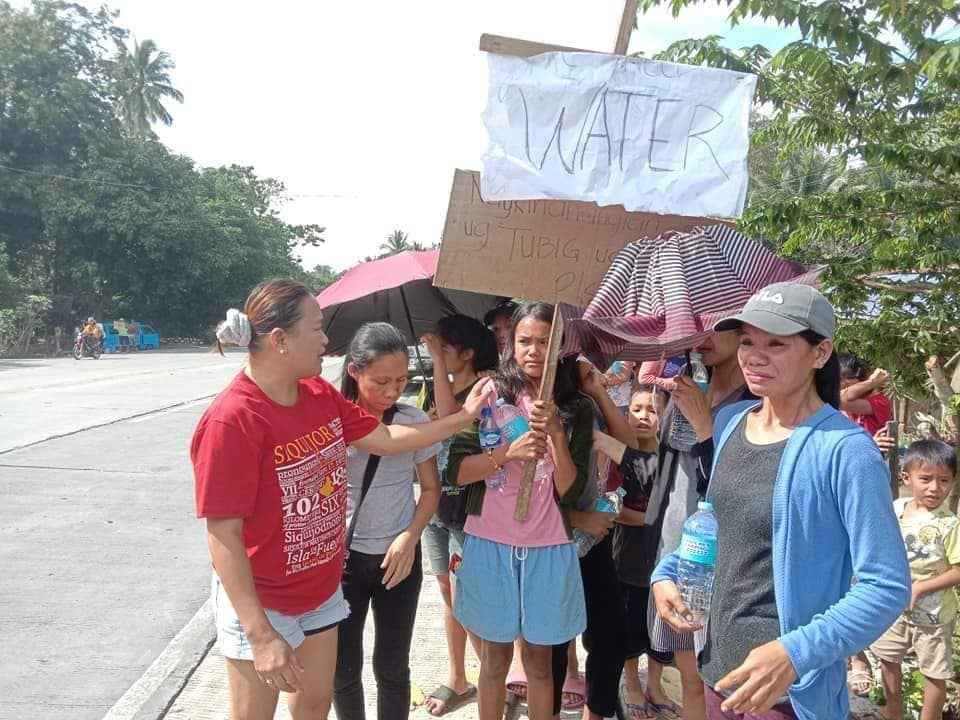 The Philippine Institute of Volcanology and Seismology ordered the evacuation of eleven barangays in Makilala town early Saturday in the wake of Thursday’s earthquake.

This developed as the North Cotabato Police Office listed five deaths in the magnitude 6.5 earthquake that was felt at Intensity 7 in Kidapawan City and the towns of Tulunan and Makilala.

The Makilala Disaster Risk Management office said rescuers on trucks evacuated some 4,100 families or 25,000 persons from the eleven barangays.

Inggo said no house has remained standing in his mountain village of Indangan, located 15 kilometers from the national highway.

But the affected villagers have refused to heed the call to go to open space evacuation centers at the town proper, saying that life there is  miserable and that nobody can outrun an earthquake anyway, according to Inggo.

A child in deep slumber inside a tent at a makeshift evacuation center for earthquake victims in Makilala, North Cotabato, one of the worst hit areas by the 6.5 magnitude quake that hit Cotabato on Oct. 31, 2019. |Photo by Esther Roque 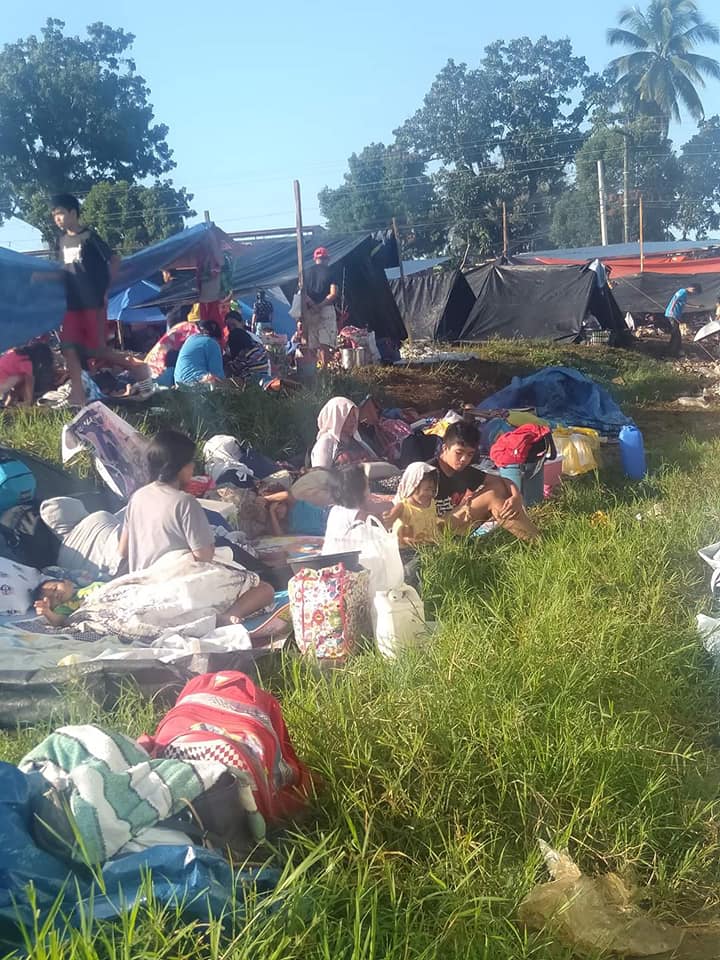 Some of these affected residents have taken to camping out along the roadside, Jeed Salarda’s Facebook post showed. 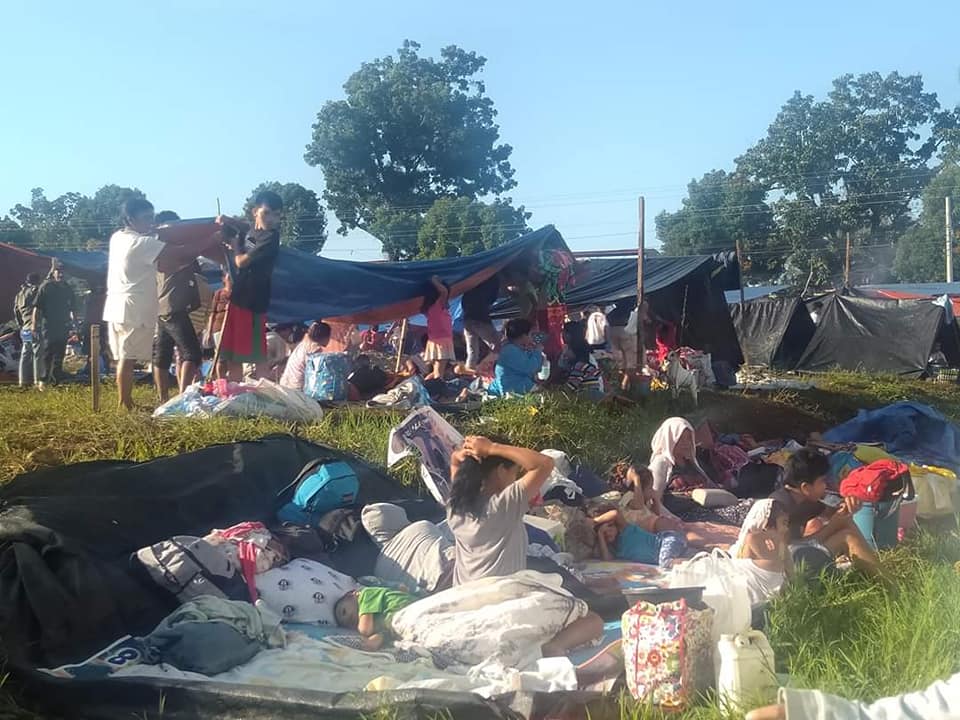 Inggo, on the other hand, also told Happy Radio FM, a local radio station in Kidapawan City, that many of his neighbors are now living along the roads and other open spaces.

“I ordered all the pregnant women and children to evacuate but many still refused,” Inggo said.

The sheer number of residents from the eleven barangays needing help has overwhelmed disaster management officials in Makilala, according to Rey Barnido of Caritas, a Catholic church-based relief agency.

A makeshift evacuation center for earthquake victims in Makilala, North Cotabato, one of the worst hit areas by the 6.5 magnitude quake that hit Cotabato on Oct. 31, 2019. | Photo by Esther Roque

However, “there are so many trucks and personnel sent by government agencies just milling around in Makilala town plaza with nothing to do,” Barnido said.

Barnido said these trucks and personnel could have been sent to fetch the residents coming from the mountainous villages who were made to walk for hours with their belongings to the town proper.

He said that when the residents reached the town center, there was little food, water and medicines available.

Most opt to stay in open spaced using donated tents.

“So many of them made appeals by writing them on cartons, paper or anything that could be placed along the highway,” Barnido said.

Esther Roque, a resident of Kidapawan City, said she saw a crowd mobbed a pickup filled with water bottles brought by a good Samaritan.

A makeshift evacuation center for earthquake victims in Makilala, North Cotabato, one of the worst hit areas by the 6.5 magnitude quake that hit Cotabato on Oct. 31, 2019. | Photo by Esther Roque

“It is so scary to pass that portion of the highway in Makilala. It is like a setting of an apocalypse movie,” Roque told Cebu Daily News Digital.

Colonel Eugene Osias of the Armed Forces Eastern Command said the Office of Civil Defense informed them that they are shipping four water purification equipment this weekend to ease the problem of potable water supply in the quake-stricken areas.

The Balay Mindanaw Foundation will also send four water purifier systems that will be installed on fire trucks that will deliver water to the affected residents.

The local governments in Lanao del Sur and the Bangsamoro Autonomous Region of Muslim Mindanao are fetching in to help. /elb