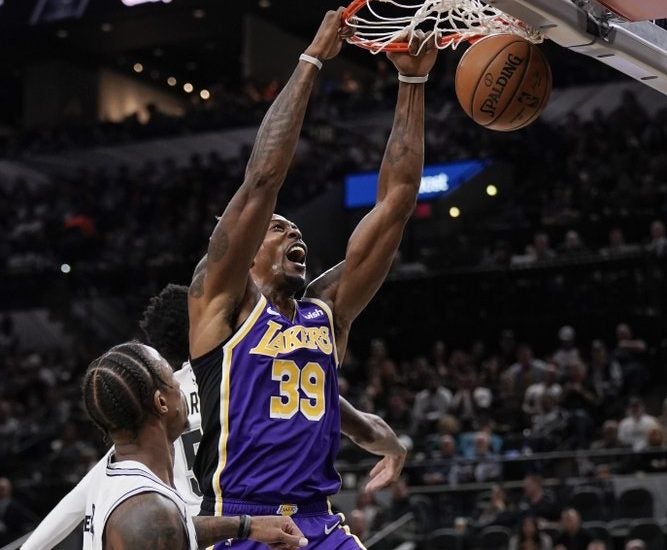 SAN ANTONIO  — For a player who wasn’t even part of the Los Angeles Lakers’ plans this offseason, Dwight Howard is providing a powerful impact alongside LeBron James and Anthony Davis.

Howard had 14 points and 13 rebounds in a throw-back performance to help the Lakers improve to 5-1 (win-loss). He was 7 for 7 from the field.

“Just effort and energy,” Howard said. ”(James and Davis) are going to take most of the scoring bulk, so my job is just to make sure I clean up all the mistakes. On the defensive end, be a force, make guys take tough shots and be aggressive. I enjoy it.”

Dejounte Murray had 18 points and 11 rebounds for the Spurs, Rudy Gay added 16 points off the bench, and DeMar DeRozan had 14. They lost for the second time in three games to drop to 4-2.

James also had a triple-double Friday night in an overtime victory in Dallas. The Spurs rallied in the fourth just as the Mavericks did in forcing overtime, but this time Howard put a stop to rally in regulation.

Howard missed all but nine games last season with the Washington Wizards after suffering a knee injury. The 15-year veteran remained an unsigned free agent until August when the Lakers took a chance after DeMarcus Cousins was lost for the season with a knee injury.

The signing has been huge for Los Angeles, which has the best record in the Western Conference.

“Any time he’s on the floor, he always seems to do something huge for us,” Davis said.

Howard had 10 points, six rebounds and two blocks in the fourth quarter.

The Spurs closed to 77-72 on Gay’s 37-footer to end the third quarter and 87-85 on Murray’s short jumper midway through the fourth.

Murray finished 7 for 12 from the field.

“He is like a young pup,” San Antonio coach Gregg Popovich said, “and he is trying to figure it out. He’s got speed, he’s aggressive and, at the same time, he’s trying to learn to run the show and find people and take good shots.”

Murray’s three-point play on a foul against James and subsequent driving layup tied it at 90 with 4:10 remaining. The Lakers went on a 7-0 run, capped by a dunk follow by Howard. The center flexed after the basket to the roar of the many Los Angeles fans in attendance.

“Dwight Howard was huge,” James said. “Every minute that he played. Great performance by him, crashing the glass, catching lobs, getting great strips defensively, giving us extra possessions. He was vintage tonight in the minutes that he played.”

The Lakers missed their first three shots and had two turnovers but the Spurs only managed a 5-0 lead. The teams combined to commit 13 turnovers in the first quarter in a sloppy start to a battle between the early leaders in the Western Conference standings.

“Defense, that’s our staple,” James said. “We’ve been talking about it and we believe it. No matter how it’s going for us offensively. If we’re struggling to shoot the ball, if we turn the ball over, we have to still continue to get stops and we did that tonight in a very hostile environment. An environment that’s very tough to win in, I know from experience. It’s a very good win for us early in the second.”

The Lakers outscored the Spurs 30-18 in the second quarter, including an alley-oop from Howard at the 3-point line to Davis.