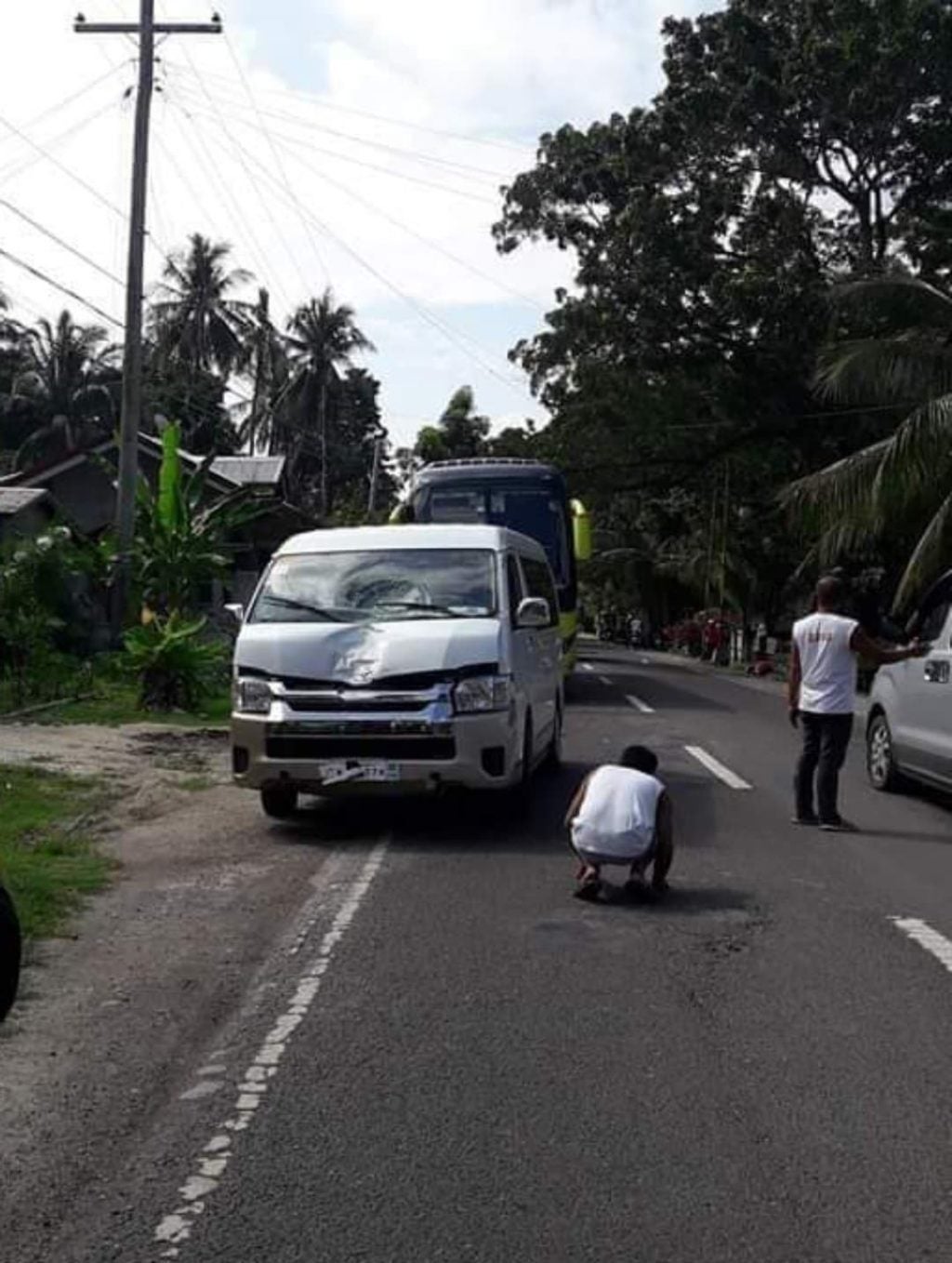 An onlooker peeps down the van where a woman is pinned and died after she was hit and dragged for about 60 meters by a tourist van speeding along the national highway of Barangay Talisay, Santander, Cebu at around 9:30 a.m. on Nov. 8, 2019. | CONTRIBUTED PHOTO

CEBU CITY, Philippines — A 47-year-old woman died on the spot after she was hit and dragged by a speeding tourist van  along the National Highway of Barangay Talisay, Santander town, Cebu, at around 9:30 a.m. on Friday, November 8, 2019.

The van, which had ten Chinese tourists on board, was driven by Lloyd Sumalinog, 28, and was on its way to Moalboal town when the victim, identified as Dolores Bustillo from Barangay Bunlan of the town,  suddenly crossed the road, Police Master Sergeant Anthony Aba, of the Santander police, told CDN Digital by phone.

Aba said that because the driver was driving fast, he was unable to immediately step on the brakes, dragging the victim, who was pinned under the van, some 60 meters from the point of impact.

Aba said Sumalinog admitted that he was driving at a speed of at least 100 kilometers per hour (kph), which was way over the  60-kph speed limit in the area.

When the emergency responders of Santander arrived at the scene, Bustillo had to be carefully extracted from under the van and was declared dead on the spot.

The  driver and all the tourists on board the van, which is owned by Gcass travel and Tours, were unharmed.

Sumalinog is now detained at the Santander police station, where he will wait for the charges against reckless imprudence resulting in homicide to be filed.

Aba said Sumalinog and the family of Bustillo were yet to meet for a settlement.

This accident involving a tourist van was not the first time that has happened in the southern towns of Cebu.

Since last year, Friday’s incident was the fourth, the latest of which happened in October where a man riding his motorcycle died after colliding head-on  with a tourist van along Sitio Tinawgan, Barangay Granada, Boljoon, Cebu.

In February last year, nine Chinese nationals were hurt after the driver of the tourist van fell asleep, which resulted for the van to turn on its side along the highway of San Fernando town.

On January 20, 2018, seven Filipino-American on a medical mission in the Philippines were killed in a crash of a tour van carrying them in Alegria, Cebu.

Land Transportation and Franchising Regulatory Board (LTFRB) Regional Director Eduardo Montealto Jr. told CDN Digital that operators of tourist vans involved in accidents and found to be negligent would face suspension of their franchise to operate.

Drivers of tourist vans are particularly required to be in good condition  since they have to spend long hours on the road when touring Cebu.

The Santander police, on the other hand, urged the tourists to only request transportations through travel and tours registered under LTFRB.

This way, they will be assured that their travels are being monitored, which also means that the vehicles have undergone safety inspections before they are rented out. /elb