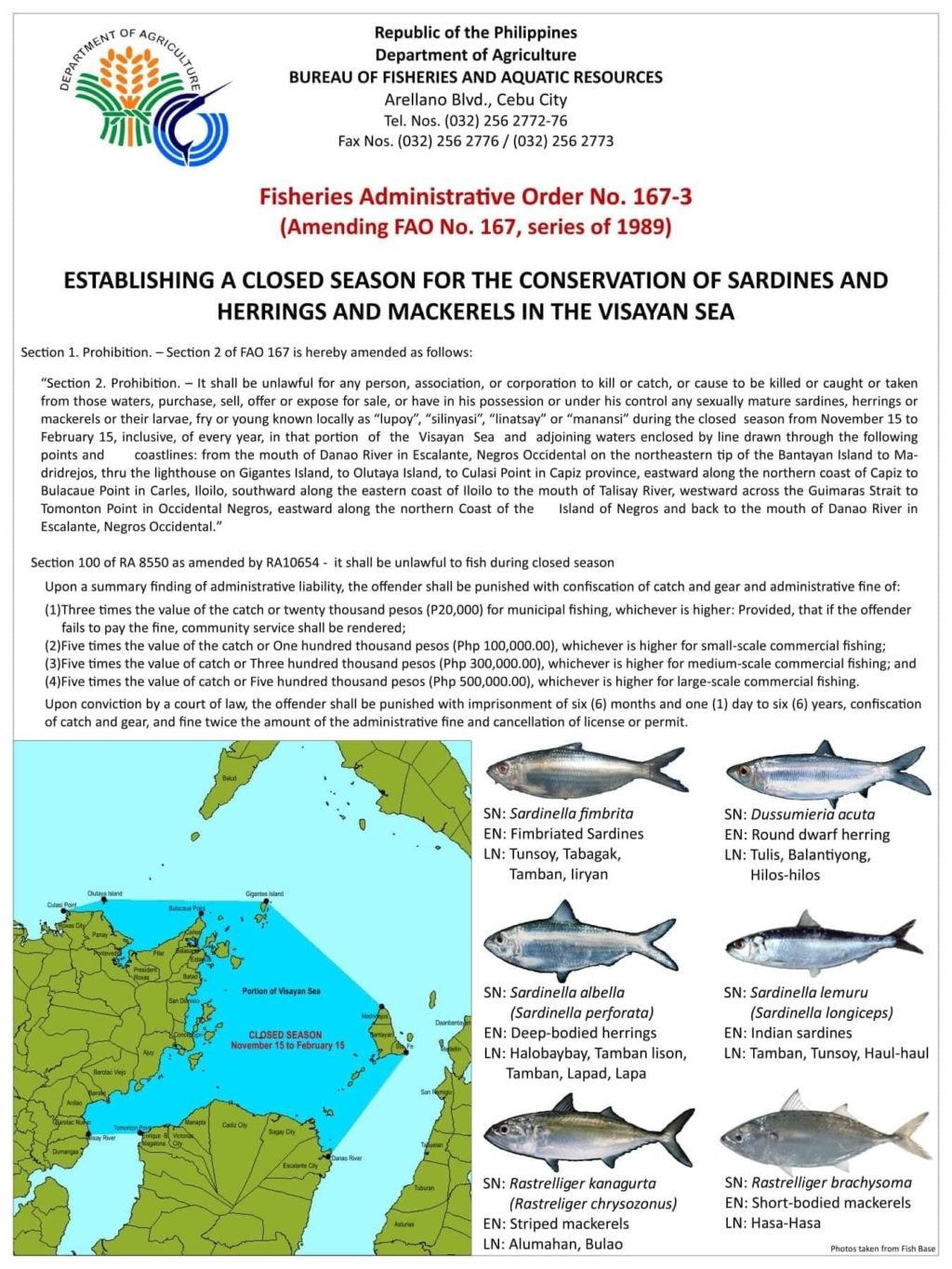 CEBU CITY — The Bureau of Fisheries and Aquatic Resources in Central Visayas (BFAR-7) will implement a 3-month fishing ban at a portion of the Visayan Sea starting Friday, November 15.

According to a press release from BFAR-7, the agency has declared a closed season until February 15, 2020.

This meant that fishing of sardines, herrings and mackerels would be prohibited for the next three months to allow them to flourish in number, BFAR-7 explained.

The three-month period has been marked as the spawning season of these species.

BFAR Region 7 Director Alfeo Piloton has encouraged the local officials and the coastal communities to cooperate with the bureau’s effort to conserve and protect the existing marine species at the Visayan Sea.

The Visayan Sea, which is one of the country’s largest fishing grounds, is surrounded by the islands of Cebu and Negros to the south; Masbate to the north; Panay to the west; and Leyte to the east.

BFAR Region 7, for its part, has intensified its information drive this month in educating the fisherfolks on the salient provisions of the Fisheries Administrative Order 167-3. A.O. 167-3 sets the policy, which establishes the annual closed season of the Visayan Sea.

The amended administrative order specifies the prohibitions that people should heed to and the penalties that one might face if found violating the policy.

“People should know of the significant intentions of implementing this policy because we are not only doing this in order to increase our current fishery production, but we are imposing this to conserve our marine resources making sure that the future generation will benefit the same,” said Piloton.

The BFAR-7 chief has also urged the commercial fishing vessel operators to comply with the policy and avoid encroaching at the portion where fishing of the pelagic species has been banned.

Piloton said BFAR Region 7 had been collaborating with the local government units concerned in holding the information and education campaign and in enforcing the policy on the given period.

He appealed to the local officials and authorities to stay vigilant in guarding the Visayan Sea and work with the bureau in its anti-illegal fishing campaign./dbs