Limasawa or Butuan? Debates continue on where first Mass was held 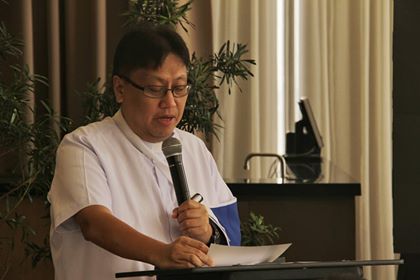 Fr. Marvin Mejia reads the historical account of the first baptism in the Philippines during a press conference for the activities for the quincentennial anniversary on the arrival of Christianity in the country this 2021. | Gerard Francisco

CEBU CITY, Philippines —— With the quincentennial celebration approaching, the Catholic Bishops Conference of the Philippines (CBCP) hopes the debates on the true location of the first Mass will finally be resolved.

Fr. Marvin Mejia, secretary-general of the CBCP, said the matter was still being looked into by the National Historical Commission of the Philippines (NHCP) and the Association of Church Historians in the Philippines.

The first Mass and the first baptism are the two major historical ecclesiastical events that are given focus in the quincentennial celebrations sanctioned by the CBCP and the Archdiocese of Cebu.

Cebu is identified as the site of the first baptism with Rajah Humabon, Queen Juana and hundreds of their community members being the first converts, according to the accounts of Antonio Pigafetta, the chronicler of the Magellan-Elcano expedition.

According to Pigafetta, the first Mass was celebrated on March 31, 1521, an Easter Sunday. Pigafetta referred to the venue as “Mazaua.”

Some say that the venue is the island of Limasawa in Leyte. Others, however, claim that Pigafetta was referring to Masao the community at the mouth of Agusan River adjacent to what is now the city of Butuan.

Nearing 500 years since the first Mass, debates continue whether it was held on Limasawa Island, in Agusan or somewhere else.

“As far as our history books, the first Mass is in Limasawa. But there are other places that are claiming that the first Mass was held in their locality. The historical commission somehow opens the discussion among experts and historians,” Mejia said.

Mejia attended the Archdiocese of Cebu’s press conference on Wednesday, November 13, which tackled about the plans of the Catholic church for the quincentennial celebration.

They announced that to commemorate the first baptism, 500 children with special needs would be baptized in the Basilica Minore del Santo Niño in Cebu City on April 14, 2021.

The first Mass, on the other hand, shall be celebrated across the country as it will be commemorated on the Easter of 2021 which falls on April 12.

This way, Mejia said, the first Mass would be well celebrated and commemorated by all churches regardless of where the true site would be.

“Even if the issue is not yet resolved, the celebration and the commemoration would still happen,” said Mejia.

He said that it would be up to the dioceses who were claiming to be the site of the first Mass if they would hold a big event for the Easter Mass./dbs