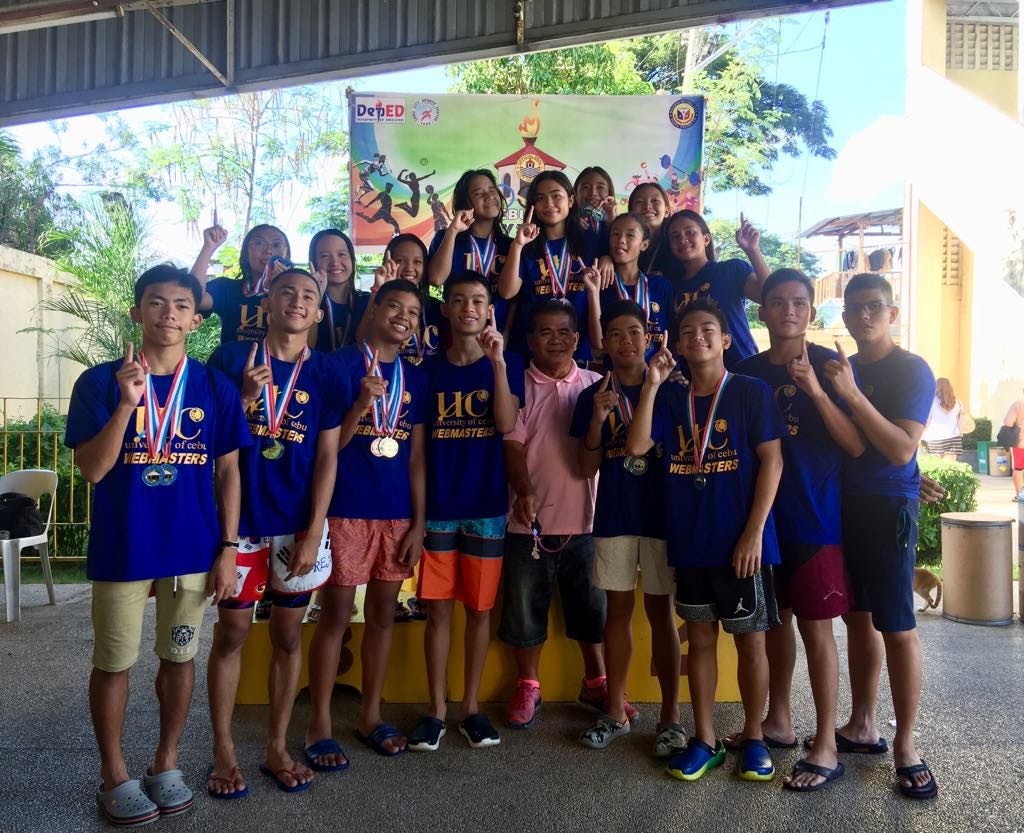 The University of Cebu (UC) swimming team with their head coach Rolando Alvarez (in pink) after the swimming competition of the 29th Cebu City Olympics, Thursday, November 15, 2019 at the Cebu City Aquatic Center. | Mars G. Alison

CEBU CITY, Philippines — After failing to end as double overall champions last year, the University of Cebu (UC) is starting on the right note as both its secondary and elementary athletes are currently topping their respective divisions in just the second day of competition, Friday, November 15, 2019, of the 29th Cebu City Olympics held in various venues here.

UC posted a commanding lead of 36 gold medals, 33 silvers and 24 bronze medals to become the current leaders in the secondary division while UC’s elementary athletes are also dominating the younger division with a medal count of 10-3-2.

The secondary defending champions strengthened their hold of the top spot by finishing as overall champions in the swimming competition which came to an end Friday, November 15.

The UC secondary tankers accounted for a medal tally of 19-19-13 while its elementary tankers finished with a medal haul of 4-1-1.

UC also got 10 gold medals from its gymnastics team who also chipped in nine silver medals and four bronze medals.

Its athletics team also accounted for  a medal haul of 3-6-3.

Trailing UC at far second is the University of San Carlos (USC) with its medal haul of 12-23-14 while Unit 3 is currently sitting in the third spot with its medal count of 9-5-2.

In the Elementary division, UC had relegated day 1 leader Unit 8

to the second spot. Unit 8 is just a gilt behind though with its medal count of 9-12-12 while defending overall champion Unit 1 is at third place with 9-11-3.

Aside from swimming, also done on Thursday was the futsal competition for secondary girls only.

In wushu, reigning supreme in the secondary division is Unit 4 with six gold medals while Unit 8 is lording it over in wrestling with three gold medals.

The elementary division has Unit 4 at the top after it finished with a medal tally of 4-2-4.

However, neither Unit 9 or 4 could count these medals in their overall medal tally as dancesport is a demo sport and has yet to become a regular event in the Palarong Pambansa./dbs