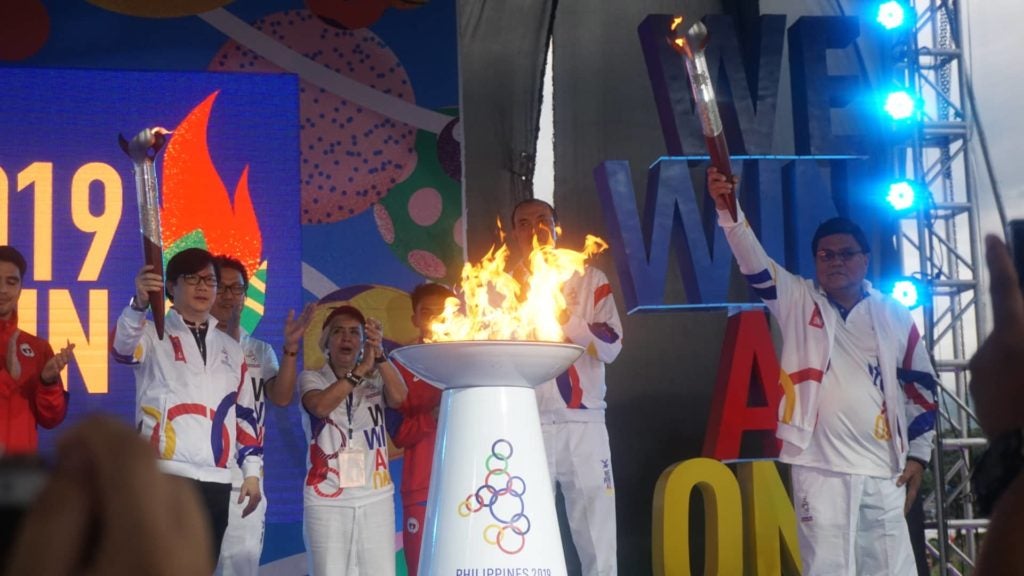 Secretary Michael Dino of the Office of the Presidential Assistant for the Visayas (OPAV) (left) and Cebu City Mayor Edgardo Labella (right) led the lighting of the torch for the SEA games torch relay in SM Seaside Cebu City this afternoon, November 16. | CDN Digital files / Gerard

CEBU CITY, Philippines — Aside from the more than 400 police officers securing the Cebu leg of the 30th Southeast Asian Games torch run at the South Coastal Road, police have also attributed their preparation and coordination among government agencies to the peaceful and successful event in the afternoon of November 16, 2019.

Police Major Allan Rosario of the Traffic Patrol Group and assigned at the secretariat team of the event told CDN Digital that the cooperation of the government agencies, which was shown in the added personnel to help the estimated 400 police officers to facilitate and secure the area, also played a crucial role that helped achieve an orderly event.

Almost 6,000 persons from the different sectors of the community participated in the torch relay which included Cebu City Mayor Edgardo Labella and Secretary Michael Dino of the Office of the Presidential Assistant for the Visayas (OPAV).

On the other hand, light to moderate traffic was experienced along F. Vestil Street in Cebu City all the way to Talisay City South Coastal Road bridge since the closure of the southbound lane of the South Coastal Road from 2 p.m. until 6:30 p.m.

Ronie Nadera of the Cebu City Transportation Office (CTTO) said that the traffic advisory posted ahead of the event day helped motorists in finding alternative routes to travel south or back to the city and avoid passing through the South Coastal Road when the road closure was implemented./dbs