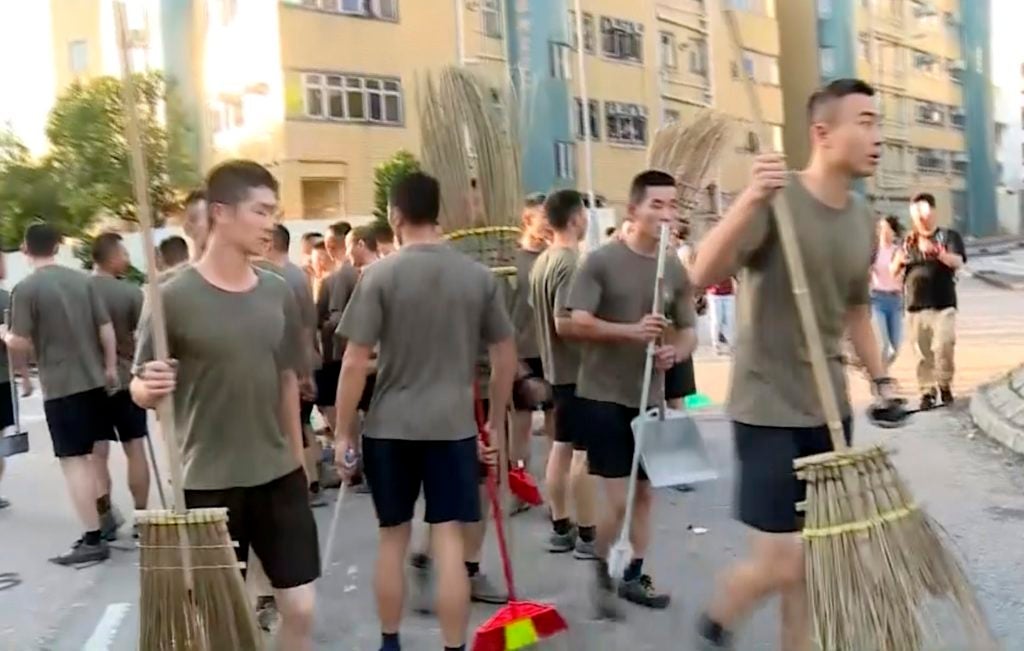 In this image made from video, People’s Liberation Army soldiers, with brooms, arrive to clean up the protest area at Hong Kong Baptist University in Hong Kong, Saturday, Nov. 16, 2019. Troops from the Chinese army joined an effort to clean up debris outside the university, which was the site of clashes this week. (Television Broadcasts Limited Hong Kong via AP)

HONG KONG — Chinese troops came out of the barracks in Hong Kong on Saturday — not to quell protests but to help clean up.

It was a rare public appearance by the People’s Liberation Army on the streets of the semi-autonomous territory, where the local government’s inability to end more than five months of often violent protest has fueled speculation that Beijing could deploy its troops.

The Hong Kong government said that it had not requested the military’s assistance in the cleanup, describing it as a voluntary community activity.

Running in formation with brooms instead of rifles, they chanted in military cadence before joining street cleaners removing debris near Hong Kong Baptist University, where police fired tear gas at protesters earlier this week.

Most anti-government protesters left Hong Kong’s universities after occupying them for about a week. Police were facing off late Saturday night with a group that remained in and around Hong Kong Polytechnic University in an apparent attempt to flush them out.

For a city now accustomed to fierce weekend clashes between police and protesters, Hong Kong had a relatively quiet Saturday. Small contingents of protesters harassed some of those cleaning up, and those at Polytechnic kept a major cross-harbor tunnel closed. About 1,000 people turned out for an annual Gay Pride event in the center of the city.

Dozens of Chinese troops, dressed in black shorts and olive drab T-shirts, came out from a nearby barracks to pick up paving stones, rocks and other obstacles that had cluttered the street and prevented traffic from flowing. Hong Kong riot police kept watch from nearby streets.

China, which maintains a garrison of about 10,000 soldiers in Hong Kong, publicly noted several times earlier during the protests that it could deploy them, though technically it would have to be requested by Hong Kong’s government.

Doing so, however, would incur international criticism and revive memories of the army’s bloody crackdown on pro-democracy protesters at Tiananmen Square in 1989.

Police advanced toward the protesters at Polytechnic with tear gas around 10:30 p.m. After a hiatus, police and protesters traded volleys of tear gas and gasoline bombs as the clash extended past midnight.

Earlier, there were scattered incidents of protesters arguing with people clearing roadways, and in one instance, throwing a gasoline bomb near City University of Hong Kong. 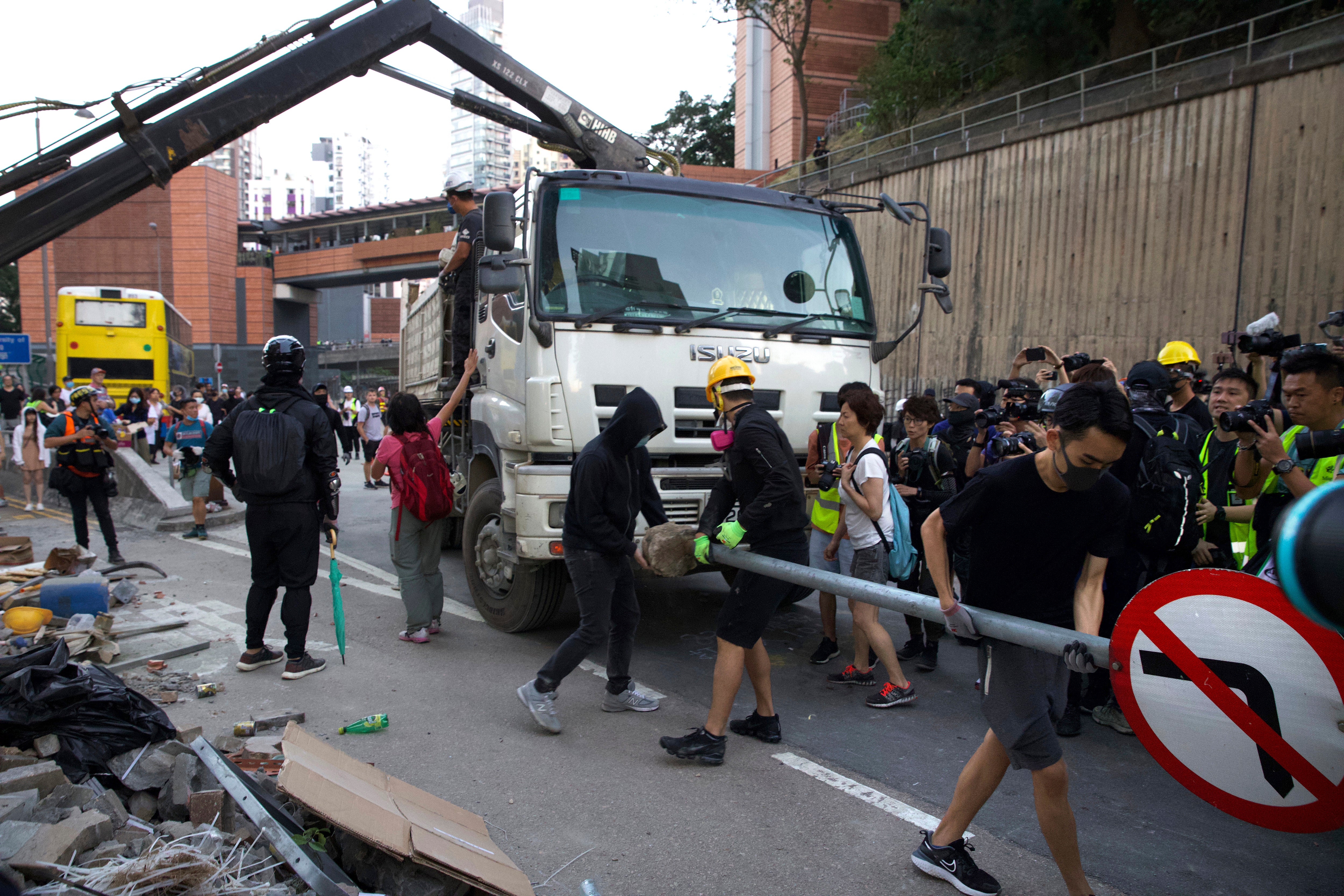 Protestors try to take back debris for road barricades that was cleared away by local residents near the University of Hong Kong in Hong Kong, Saturday, Nov. 16, 2019. Rebellious students and anti-government protesters abandoned their occupation of nearly all of Hong Kong’s universities Saturday after a near weeklong siege by police, but at least one major campus remained under control of demonstrators. (AP Photo/Ng Han Guan)

Protesters also massed near Hong Kong University in the evening to try to block a main road again, but they were stopped by police firing pepper-spray balls.

Traffic disruptions continued to plague parts of Hong Kong, and schools and universities remained closed in the city of 7.5 million people. Now in their sixth month, the anti-government protests have grown increasingly violent even as they have shrunk in size, often causing chaos in the streets.

The protests were sparked by a government decision to submit legislation that would have allowed the extradition of criminal suspects to the mainland. Activists saw it as an erosion of Hong Kong’s autonomy under the “one country, two systems” formula implemented in 1997, when Britain returned the territory to China.

The bill has been withdrawn, but the protests have expanded into a wider resistance movement against what is perceived as the growing control of Hong Kong by Communist China, along with calls for more autonomy for the territory.

Universities have become the focus of the protests in the past week and the main battleground between pro-democracy activists and the police. The presidents of nine universities issued a joint statement late Friday calling on the government to resolve the political deadlock and restore safety and public order.

“No political viewpoint gives a license to damage property, employ physical threats, or use violence against individuals,” the statement read in part. “It is regrettable that societal disagreement has led to university campuses becoming major political battlefields, and that the government response has so far not been effective.”

Hong Kong media reported Saturday that at least 300 Dutch exchange students were asked by their home universities to return home because of the violence.