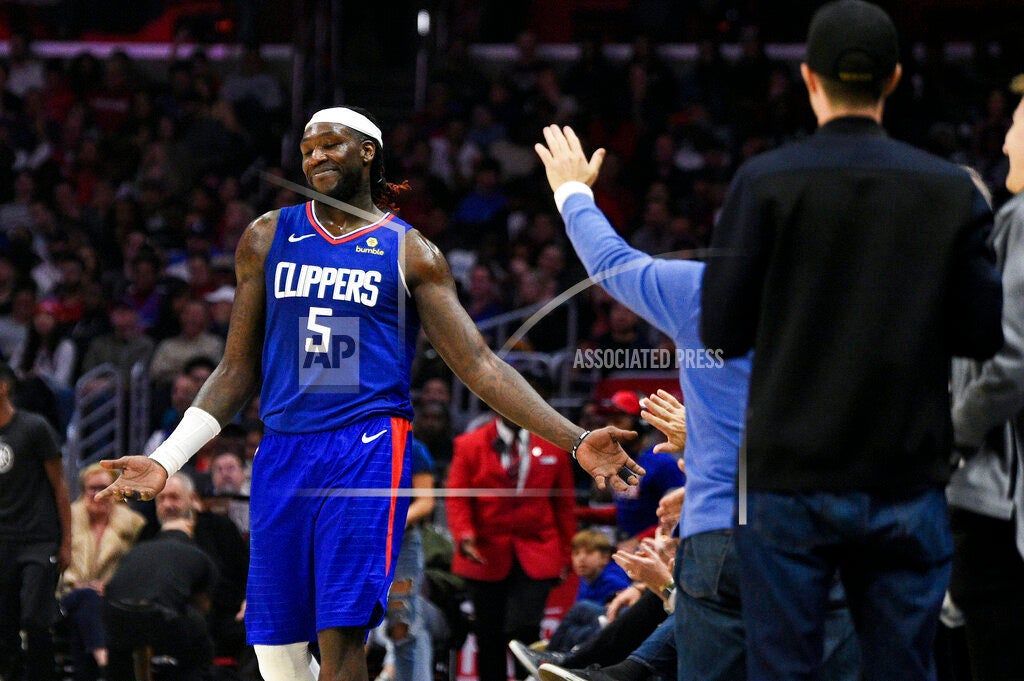 Los Angeles Clippers forward Montrezl Harrell, left, celebrates with the crowd after making a contested shot during the second half of an NBA basketball game against the New Orleans Pelicans in Los Angeles, Sunday, Nov. 24, 2019. The Clippers won 134-109. (AP Photo/Kelvin Kuo)

LOS ANGELES — Doc Rivers has seen the Los Angeles Clippers roster undergo many changes over the past 15 months. Montrezl Harrell has remained one of the few constants.

Harrell showed again on Sunday night (Monday morning, November 25, 2019, Philippine time)  that he shouldn’t be overlooked despite the additions of Kawhi Leonard and Paul George. The fifth-year forward tied a career high with 34 points as the Clippers beat the New Orleans Pelicans 134-109 for their fifth straight win.

‘They are starting to see Montrez is good. He can score a lot of different ways and it seems like each year he is adding more to his game,” Rivers said. “He went left a couple times tonight when the scouting report is to not have him go right.”

It is the fifth 30-point game of Harrell’s career and the second time he has scored 34 this season (the other was Nov. 6 against Milwaukee). He was 13 of 18 from the field and grabbed 12 rebounds as he led the Clippers in scoring for the fourth time this season.

“It is great that we can still be able to run and collect wins while we are still adjusting,” Harrell said. “We’re a deep team and anyone can have a big night.”

Brandon Ingram, one of three Lakers players involved in the Anthony Davis trade, led New Orleans with 24 points and eight rebounds in his first game back at Staples Center. Jrue Holiday scored 18 and E’Twaun Moore had 17.

“There have been a couple times where we’ve been down and try to fight back and it has been a little too hard with the deficits. I feel like that has been the standard so far,” Holliday said.

JJ Redick and Holiday hit 3-pointers to give the Pelicans a 10-6 lead three minutes into the game before the Clippers took control with a 15-4 run. George keyed the run with a pair of 3s and Leonard added five.

The Clippers went into halftime with a 72-56 advantage before New Orleans cut the lead in half with an 11-3 run to start the third quarter. Jaxson Hayes’ layup drew the Pelicans to 86-80 with 4:53 remaining in the quarter but that would be as close as they got as Los Angeles countered with an 11-2 run, which included Harrell scoring the last six points.

“They cut it to six and we got it right back up. I thought our guys got back to playing,” Rivers said.

In the three games that Leonard and George have played together, the Clippers are averaging 15.3 3-pointers per game, which is five more than the first 14 games.

Los Angeles had 16 3-pointers on Sunday with eight players hitting from beyond the arc. George led the way with six 3s.

“Everyone is trapping on us but we are moving the ball and getting great looks. They’re wide open, so we better take them,” Rivers said.

Read Next
3 Cebuanos in PH U-22 team for SEAG