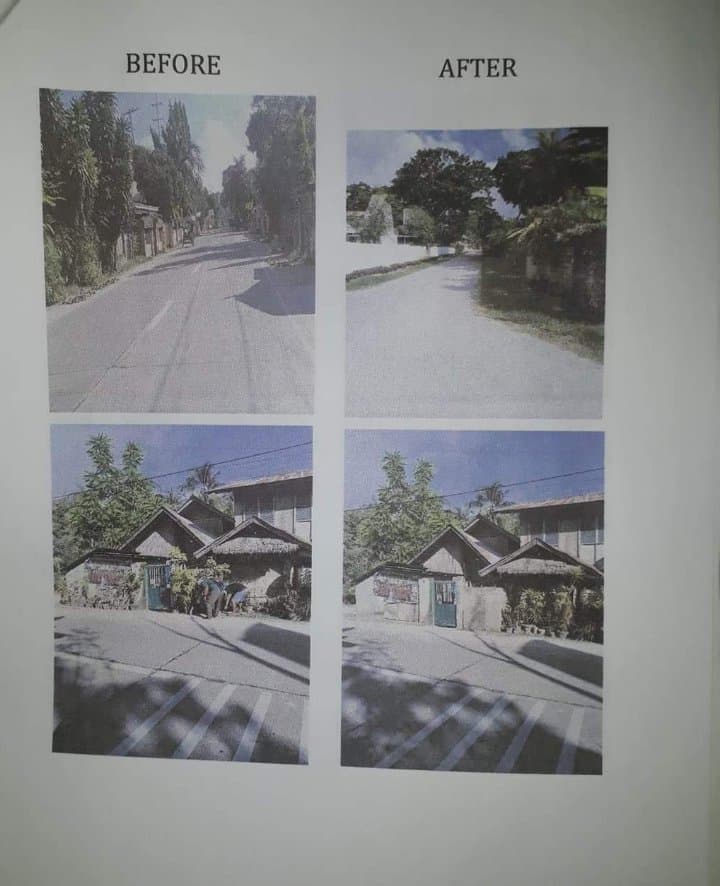 Ginatilan town in southern Cebu reports the Department of Interior and Local Government (DILG) that they already complied with the road clearing directive of President Rodrigo Duterte. These photographs were among the attachments which they submitted in their November 25 reply to the DILG show cause order. | Photo from Ginatilan Mayor Michael Dean Singco

CEBU CITY, Philippines — Almost two months since they received a failing mark in their road clearing efforts, the municipality of Ginatilan in southwestern Cebu is asking the Department of Interior and Local Government (DILG) for a reassessment of their compliance with the national government’s directive.

Mayor Michael Dean Singco said that they continued implementation of their road clearing programs even after they received the DILG rating to ensure a 100 percent compliance.

Ginatilan, a fifth class municipality in southwestern Cebu, was among the seven local government units in Cebu province that were given a failing mark during the DILG assessment.

“In this light, we would like to invite the DILG to make an inspection and reassessment of our efforts and see that we have far exceeded the criteria for assessment,” Singco said in an interview with CDN Digital.

Singco said they created a Road Clearing Task Force “bearing in mind the following objectives — transparency, efficiency and the observance of due process to those who would likely be affected.”

The Task Force did their reassessment on November 15, 2019 based on the criteria that was used by the DILG validation team during their first assessment on September 30.

“The goals we have set for our Road Clearing Task Force did not come close to the criteria for assessment which we only knew the day before the assessment,” Singco said.

Singco attached a copy of their self-assessment to the reply which they sent in response to the show cause order issued by Interior Secretary Eduardo Año.

The town’s reply was received at the DILG Cebu Provincial Office on November 25.

While Singco admitted that the 60-day deadline was not enough for them to completely carry-out their road clearing initiative, he said they did their best to comply with the President’s verbal orders which he issued during his 4th State of the Nation Address (Sona) on July 25.

Since their November 15 reassessment, Singco expressed confidence that they are now fully-compliant with the President’s road clearing orders.

Aside from conducting road clearing activities, the municipal council also passed an ordinance that mandates the removal of  illegal structures that obstruct roads and sidewalks.

Offenders risk payment of P1,000 fine and the possible revocation or non-renewal of the permits of businesses that own these illegal structures. / dcb