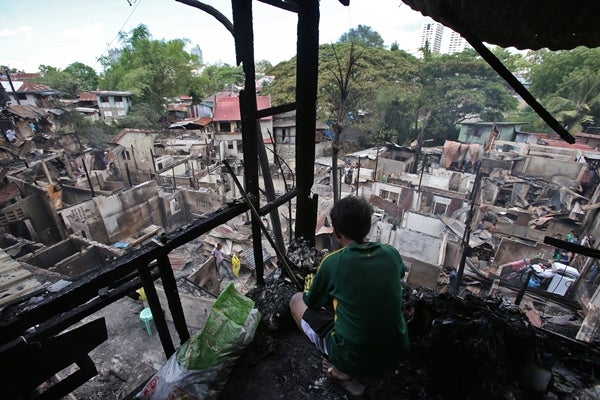 A fire victim looking over the other 30 houses at Purok tres riverside barangay Kamputhaw.(CDN PHOTO/JUNJIE MENDOZA)

An 89-year-old man was killed in an Easter Sunday fire that razed 30 houses in Upper Purok 3, Kamputhaw in Cebu City.

Raymond Belda, the lone fatality, lived alone in the two-storey house, where neighbors said the fire started about 10:10 p.m. in the upper floor.

Belda had difficulty walking due to his advanced age. By the time his neighbors and relatives found out about the fire, it was too late to rescue him, said fire investigator SF02 Daniel Relatado Jr.

The old man, whom neighbors described as a “balikbayan” and pensioner, usually went to sleep in the early evening.

“The cause of the fire is still under investigation. The neighbors didn’t hear anything unusual until they noticed the fire spreading from the second floor of Belda’s house”, Relatado said in Cebuano.

The fire affected settlers occupying government land owned by the University of the Philippines Cebu, part of 13 hectares in barangays Kamputhaw and Lahug donated in 1926 by the Cebu provincial government.

UP Cebu Dean Liza Corro, in an interview, said that while the school is intent on recovering its property for development projects, it would not come in to fence off the site or prevent victims from rebuilding their homes.

“As much as we want to recover UP properties, that is not the way we do it in UP. We’ve always been compassionate in our relationship with our informal settlers,” she said.

The original estate donated to UP Cebu extends farther back from the administration building along Gorordo Avenue to the Lahug Creek.

At the fire site yesterday, house owners were standing guard over the spaces where their houses used to stand to prevent looters from hauling off GI roof sheets or other materials.

The fire was placed under control at 11:04 p.m of Sunday but was extinguished at about 2 a.m.
By then, 30 houses were destroyed.

Firemen had difficulty responding to the alarm becaue Belda’s house was located in the interior of the village and the access roads were narrow.

Relatado said they had to connect at least 10 hoses so the water could reach the fire scene.

Property damage was initally estimated at P300,000 by the fire department.

Fire victims were evacuted to the Purok 8 gym.

Councilor David Tumulak said it’s up to the mayor to decide whether to give cash assistance or housing materials.

Monterona was busy clearing debris in his burned house yesterday.

He said no one was to blame and that he believes the fire was an accident.

The remains of his neighbor, Belda, were found later.

“People were trying to save him (Belda) but they couldn`t enter his house because the windows were heavily bolted. He was sleeping at that time and was trapped. I was climbing up to get into his room but the fire blazed,” said 36-year-old Jermaine Baratbate in Cebuano.

Baratbate said he was the first person who tried to save Belda.

Neighbors said Belda preferred to live alone and worried that his belongings would be stolen.

Edna Magno, 34, a native of McArthur, Leyte province, said she would have to start all over again.

She and her sister had come to Camputhaw, Cebu City, to start a new life after typhoon Yolanda struck their hometown in November last year.

“One step pa man unta to. Unya balik nasad sa uno, pero sige na lang.(This was supposed to be one step forward. Now we have to start all over again.),” said Edna.

All they saved was a handbag and cellular phone. Their clothes and important personal documents were destroyed in the fire.

“Para nako mas grabe pa ni sa Yolanda. Sa Yolanda, naa pa miy maluwas nga butang pero kani ugdaw gyud (For me, this is worse than typhoon Yolanda. When the storm struck, we still had time to save our things. But the fire turned everything to ashes.),” said Edna with a deep sigh.

The sisters, who are staying in Purok 8 gym for now with other fire victims, plan to look for another house to rent and start a new life again. /With CNU interns Rosemarie R. Cananea and Anie M. Paujana

Read Next
Cebu has sunny weather despite low pressure area