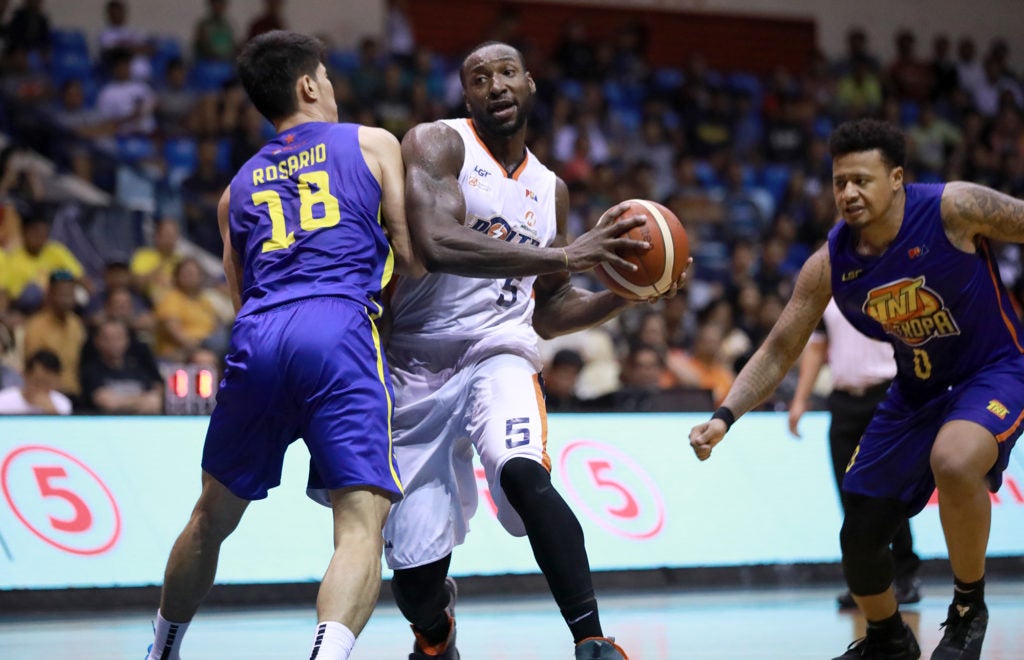 ANTIPOLO—With its defense clicking in the final three periods, Meralco on Monday night, December 23, 2019, took the best that TNT could offer and beat the KaTropa silly in the end, with an 89-78 victory in the decider of their best-of-five series at Ynares Center here putting the Bolts back in the PBA Governors’ Cup Finals against an old nemesis.

The Bolts steadily peeled away from the powerhouse KaTropa from the second quarter on, with rookie Bong Quinto and import Allen Durham doing most of the damage in the middle two quarters before getting help from Chris Newsome at winning time as TNT never found the answers to them.

“I feel like we really had everything thrown at us. But everybody was focused to get back to the championship round again,” said coach Norman Black as he and his charges earned a third crack at crowd-darling Barangay Ginebra in the last four years, hoping to come out on top this time and end two championship stints of heartache.

Durham was just a pair of assists shy from a triple-double with 28 points and 10 rebounds. Newsome finished with 23, 16 of which coming in the unflinching second-half performance of the Bolts.

But Black saved most of his praise from his young ward, Quinto, who had a career night with 19 points built on a highly efficient 7-for-9 shooting clip.

“I’ve learned over the years that if you could get players who are versatile and can do more than one thing and play more than one position, they probably can help you win games,” he said. “And Bong Quinto is a good defender, he’s a good shooter, he’s a good assist guy and he’s really contributed a lot to the team.”

Meralco and Ginebra figured in two consecutive classic match-ups for the season-closing crown from 2016, with both best-of-seven series won by the Gin Kings in a combined 13 games.The KaTropa drew the usual figures from import KJ McDaniels, who had 30 points and 13 rebounds. Ray Parks had 15 points.

Asked about a foe to whom they have lost twice in as many meetings, Black was unabashedly direct.

“We have a lot of respect for Ginebra and Tim Cone. Tim is a top coach in the league. But our goal is to win. Simple as that,” Black said. “It doesn’t matter who we’re playing against. Our goal is to win a championship. We’ve already lost two. We only have one goal.”

Meralco was a sorry footnote to Ginebra snapping an eight-year wait for a title in 2016 when Justin Brownlee nailed a three-pointer at the buzzer that won it all in Game 6.

The following season, the series went the full seven-game distance.