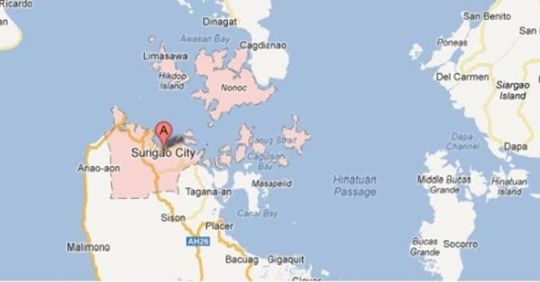 SURIGAO CITY – A boat carrying 20 passengers bound for Dinagat Island for Christmas were rescued by the Philippine Coast Guard (PCG) after its engine ran aground, buffeted by strong winds and heavy rains brought about by Typhoon Ursula on Tuesday.

The boat’s engine failed off the coast of Hikdop Island here at 3 p.m. Tuesday, prompting the crew to send distress calls to the Philippine Coast Guard and other rescuers from San Jose town.

“At 3:45 p.m., our aluminum boat team reached the area and found some 20 people in the boat, so we decided to bring in a much bigger vessel, the MCS 3005 patrol boat to rescue the stranded passengers,” said Cdr Lawrence Roque, station commander of the Philippine Coast Guard (PCG) station in Surigao del Norte.

Roque said the boat sneaked out of Surigao City using a different route amid the ban on sea travel earlier issued by PCG because of the typhoon.

“The passengers of the boat wanted to go home to Dinagat Island for the December 25 Christmas celebration,” Roque said. “Since we have suspended all trips to Dinagat Island, they found another way of going there despite the dangers from the incoming storm,” said Roque.

Some boat passengers did not take the ride back to Surigao City with the PCG but opted instead to stay in Barangay Lisondra, Hikdop island for the evening, hoping they could find another boat that would take them to Dinagat when the weather eases up. “They wanted to be closer to Dinagat island, that’s why they opted to stay in Hikdop Island where the boat ran aground,” a rescuer said.

Some 116 cargo trucks, cars and other vehicles stretching more than a kilometer long were stranded in Barangay Lipata as of 4:30 pm on Christmas Eve. Ferry boats at the Lipata were not allowed to cross over to Leyte yet because of the danger posed by the typhoon.

The figure was on top of the nearly 1,000 passengers who were not admitted to the port terminals but opted to wait out the storm somewhere else.

“There are a lot of people from Dinagat Island who are stranded in Surigao City,” he said. “They include those who went to Surigao to buy something in preparation for Christmas,” said Crisostomo.