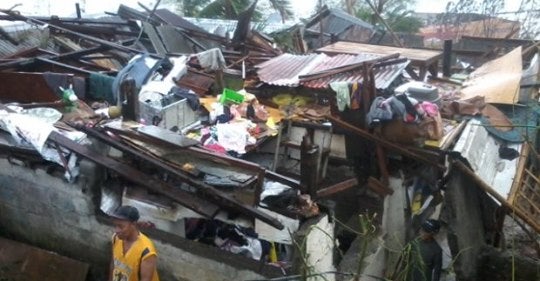 PANAY, CAPIZ—“We are back in our ‘condominium’ but we hope we will not stay here long,” Jasmin Bansale said. She was referring to a classroom at Felix Balgos National High School in Barangay Agbalo in Panay town, Capiz province, about 21 kilometers southeast of the capital city of Roxas.Bansale’s family has been staying at the school since Christmas Day after their house was destroyed by the strong winds and floods brought by Typhoon Ursula (international name: Phanfone).

At least 30 families were staying in the school’s classrooms and grandstand.

It was also their temporary home when their house was destroyed by Supertyphoon Yolanda (international name: Haiyan) six years ago.

This time, the Ursula survivors are hoping that the relief assistance for housing materials will be released immediately unlike in the aftermath of Yolanda.

“We hope it will be fair and timely this time,” said Bansale, referring to the delays in the release of assistance that prompted repeated protests from Yolanda survivors.

Bansale and her family was excluded from the list of Yolanda beneficiaries who received P30,000 in assistance from the Department of Social Welfare and Development. She blamed the failure of the previous barangay officials to include them.

Like Bansale, Ninfa Barroa, also of Barangay Agbalo, hoped that the national government would immediately address the needs of those left homeless.

Since Christmas Day, she and her four children have been sleeping in a jeepney owned by her brother-in-law parked along the national highway.

“We want to go back to our house but we need to rebuild it,” she said.

Agbalo village chief Roderick Gabasa said 32 houses were destroyed and 118 damaged in their barangay.About 70 percent of the village had been flooded and about half was still submerged on Friday.

“We need help from the national government especially in rebuilding and repairing houses,” Gabasa told the Inquirer.

There were still 56,295 evacuees in Western Visayas as of Saturday morning, according to the Regional Disaster Risk Reduction Management Council.

Aside from the provinces of Aklan and Capiz, 10 towns in Iloilo, Aklan and Antique have been placed under a state of calamity.

Bansale appealed for urgent assistance from the national government for their immediate needs and for rebuilding their house.“We were supposed to harvest our palay crop soon but these are all gone because of the floods,” she said.

The evacuees have been subsisting on relief packs from the barangay, municipality and province consisting of rice, canned goods, noodles, coffee and sugar.

Bishop Patricio Buzon of the Diocese of Bacolod has called on the public to help the victims of Ursula.

“As brothers and sisters of the same Father, our helping those in need is what the Church is all about,” he said.

The bishop said there would be a second collection during the Sunday masses. The money collected would be donated to areas where assistance was most needed. —WITH A REPORT FROM CARLA P. GOMEZ

Read Next
Things you should be doing this 2020