Jordan Clarkson stars off the bench as Jazz rout Pistons 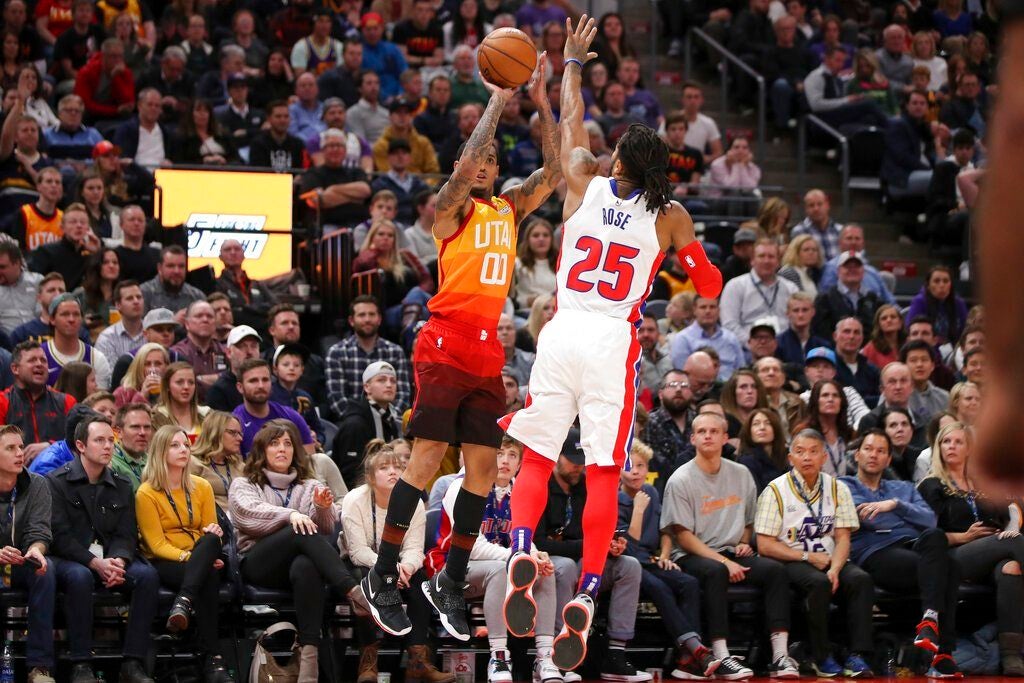 The surging Jazz pulled away for a 104-81 victory over the Detroit Pistons on Monday night by leaning on their trademark rugged defense. Utah ran the Pistons off the 3-point line, holding Detroit to 4-of-14 shooting from the perimeter. The Jazz also forced 17 turnovers and scored 25 points off those miscues.

In the end, Detroit managed a season low in points.

Getting stops revived a sluggish Utah offense. The Jazz shot just 33.3% from the floor in the first half, but connected on 59% of their field goal attempts after halftime. They made 26 baskets over the final two quarters after totaling just 13 through the first 24 minutes.

“The biggest thing in the first half was just the offense getting stagnant,” guard Donovan Mitchell said. “We did what we wanted on defense.”

Derrick Rose had 20 points to lead the Pistons, and Andre Drummond added 15 points and 13 rebounds. Detroit has dropped seven straight against Utah.

“It’s the tale of two halves and until we grow up and understand that, that’s our cross to bear,” Pistons coach Dwane Casey said.

Utah never found much of an offensive rhythm in the first half. The Jazz did not score their first basket until five minutes into the game. Detroit did not fare much better, shooting 38% in the half. That opened the door for Utah to keep things close.

The Pistons carved out a 38-31 lead late in the second quarter when Tim Frazier capped a 9-2 run with a driving layup. Detroit never trailed during the period, but could not pull away. Utah closed the gap in the final two minutes, cutting the deficit to 40-39 going into halftime when Mitchell and Gobert each scored on a dunk and Mitchell added a pair of free throws.

The Jazz really got rolling on offense in the third quarter. Utah opened the second half with a 16-2 run to take a 55-42 lead midway through the period. Mitchell sparked the surge with back-to-back baskets, and Joe Ingles punctuated it with consecutive buckets as well.

“In the first half, we just came out with a lot of energy,” Drummond said. “We just lost our groove coming out of halftime. That’s a good team so they broke it down, they watched what we’re doing and found ways to exploit what we were doing and they got themselves going.”

Detroit cut the deficit to 70-63 early in the fourth on a driving floater from Rose. The Jazz pulled away for good behind a 20-6 run. Bogdanovic fueled the spurt with three baskets. Mitchell capped it with a step-back jumper that gave Utah a 90-69 lead with 5:17 remaining.

“We were getting stops,” Clarkson said. “We got some buckets in transition. It made the game easier for us.”

Clarkson has rejuvenated the Jazz bench in a short time since Utah acquired him in a trade with Cleveland last Tuesday. Clarkson is averaging 16 points on 47% shooting through his first three games with the Jazz.

He kept the offense afloat Monday with timely baskets in each quarter and became the first Utah reserve to score 20 points in a game this season.

“That’s one of the things we know he’s capable of doing,” coach Quin Snyder said. “I think he picked his spots and guys did a good job of finding him.”

Clarkson has been a quick study on the complex terminology and sets the Jazz use on offense. He credited teammates like Mitchell and Ingles with talking to him and helping him know where to go on the court.

“I’m coming in and just trying to listen and grow every day,” Clarkson said.

Casey criticized his team after the game for lacking a sense of urgency coming out of halftime. Detroit committed seven turnovers and made just one basket over the first six minutes of the third quarter.

“I guess I need to throw coolers and throw chairs and stuff at halftime to get professionals to come out ready to play,” Casey said. “Maybe stand on my head.”

Pistons: Blake Griffin (left knee soreness) and Markieff Morris (left foot sprain) did not play. … Detroit was outscored 36-35 in bench points. The Pistons came into the game ranked second in bench scoring with 47.5 points per game.

Jazz: Gobert is averaging 16.2 rebounds over his last 10 games. … Rayjon Tucker made his Jazz debut and finished with two points and a rebound in two minutes. … Utah outscored Detroit 15-11 in fast-break points.

The Pistons visit the Los Angeles Clippers on Thursday.

The Jazz visit the Chicago Bulls on Thursday.