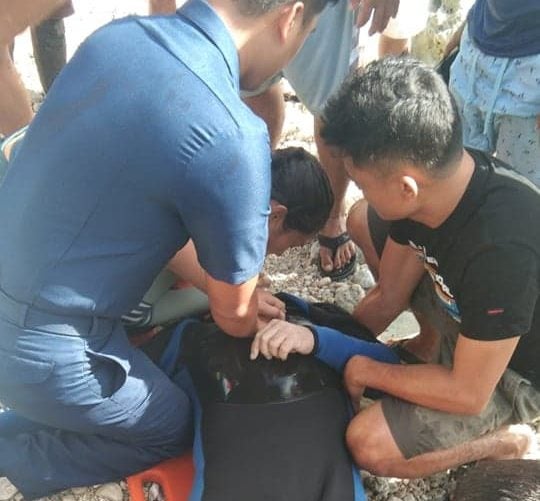 Personnel of the Philippine Coast Guard try perform CPR on a Japanese national who fell ill while snorkeling in Barangay Tanawan in Oslob town during a whale watching activity. The Japanese died upon reaching the Oslob District hospital. | photo courtesy of PCG-7

CEBU CITY, Philippines – The 52-year-old Japanese national who died while snorkeling in a whale shark-watching activity in Barangay Tanawan in Oslob town, southern Cebu on Thursday morning, January 2, 2020, did not drown, according to the Philippine Coast Guard in Central Visayas (PCG-7).

Marinubo Kuriyama was pronounced dead on arrival at the Oslob District Hospital at around 8:45 a.m on Thursday.

In its initial investigation, the PCG-7 said in a statement sent to the media that the Japanese died of “unusual causes.”

According to the report of the PCG-7, the snorkeling guide of Kuriyama, Airi Hemeno, said the Japanese complained of breathing problems while snorkeling.

Thereafter, blood began to come out of Hemeno’s mouth and nose, which prompted the guide and other personnel in the area to bring the victim to shore.

The coast guard officer on duty at that time, Seaman First Class Joselito Bartolome, was alerted by the guide and he immediately responded to the scene. Upon noticing that the victim no longer had a heartbeat, he performed cardiopulmonary resuscitation (CPR) on Kuriyama.

Kurayama was revived in the shore and started to vomit when he regained consciousness.

He was then rushed to the Oslob District Hospital, but he was pronounced dead on arrival at 8:45 a.m.

Lieutenant Junior Grade Michael John Encina, the spokesperson of the PCG-7, said that they are waiting for the results of the medical investigation for the actual cause of death.

The family of Kurayama was brought to Oslob District Hospital after the incident. /bmjo