More than dressing up the Santo Niño: It’s a thanksgiving 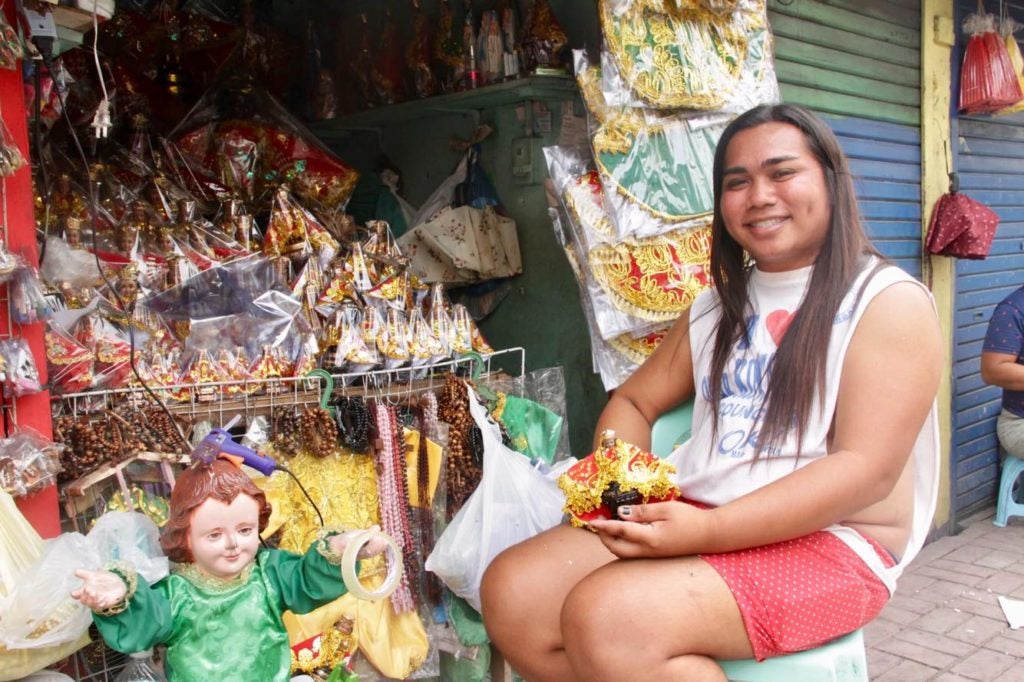 Washington Villarin Cañete, 22, a vendor of Santo Niño statues and statuettes in a stall beside the Basilica Minore del Santo Niño in Cebu City, also changes clothes for the Child Jesus images. He prays for happy and healthy life for his family. | CDND Photo/ Raul Constantine Tabanao

CEBU CITY, Philippines— Sinulog is one of the grandest festivals around the Philippines.

More than the revelry that the festival is known for, its the time of the  year — every third week of January — when devotees of the Child Jesus come to Cebu by the thousands.

And devotees from different walks of life flock to the Basilica Minore del Santo Niño de Cebu to pay homage to the Holy Child.

Around the area where the historic Basilica is located in downtown Cebu City,  your eyes are immediately drawn to the stalls with images of the Santo Niño in varying sizes clad in his regal coat of red and gold.

It is in this place where you will find the 22-year-old vendor who changes the clothes of the images of Santo Niño for a living.

Meet Washington Villarin Cañete, a native of Cogon Pardo, who has been selling the Santo Niño images and clothes for ten years now. 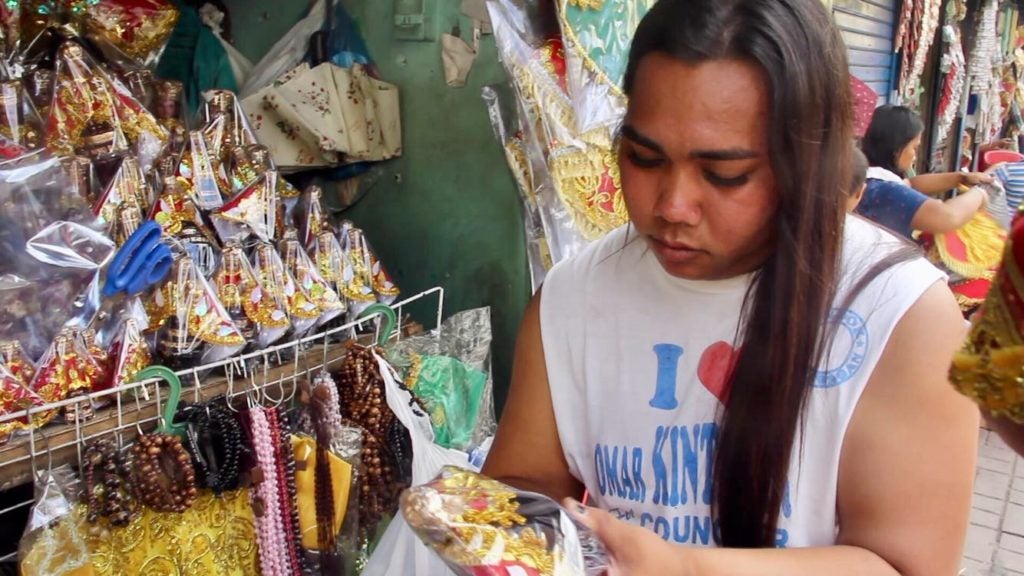 Washington, who who has been selling Sto. Niño images and clothes for ten years,  learns how to change the clothes of the Santo image from his parents. | Raul Constantine Tabanao

Washington, at a tender age of 12, learned how to change the clothes of images of Santo Niño from his parents who originally own the stall.

(My parents taught me how to do this because life is difficult and this is the kind of work I have been taught to do since I was young. Also, I didn’t finish my schooling.)

In Cañete’s small stall, you can see vibrant colors of red and gold, as these are the colors of the clothes of the Santo Niño.

(These are different kinds and sizes for the articles of clothing of the Señor, dependingon the size  of your statue. There is velvet, suede, satin… it depends on the owner who wants the a change of clothes for the image.)

It usually takes 20 to 30 minutes to change the clothes of the Santo Niño because of the careful process that has to be done, starting from the time the image is wiped clean until he has donned his new clothes. 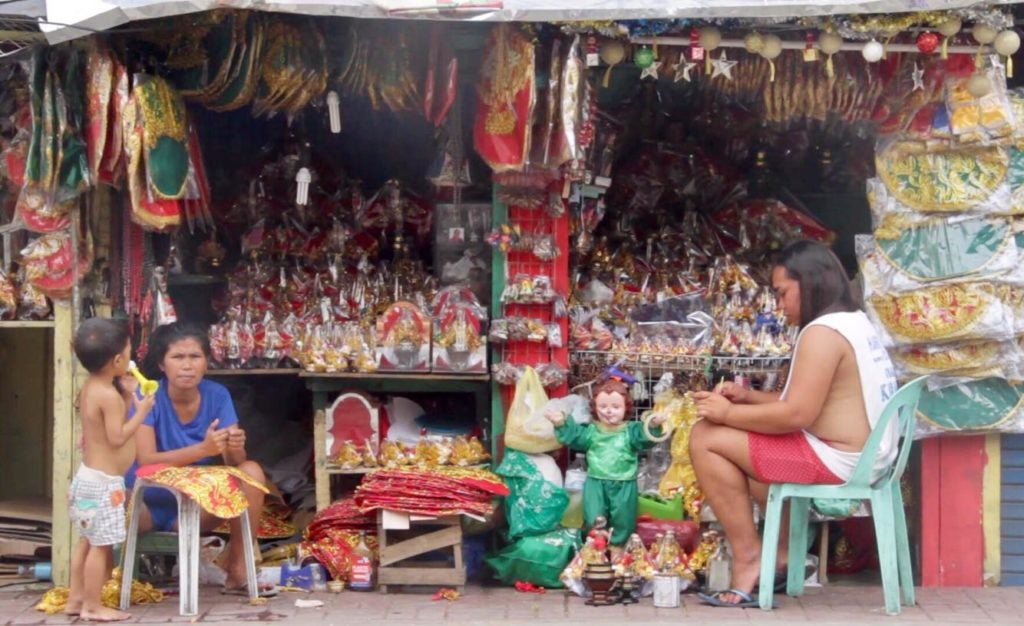 Aside from Washington, his sister, Nanay, also sells Sto. Niño images and clothes for a living. | Raul Constantine L. Tabanao

(First, we have to wipe the image to remove dust. Then we carefully remove his old clothes. After that, we apply a fresh coat of varnish to give it a new sheen and another coat of gold in area where it’s needed before we put on the new clothes that we seal in with a glue gun.)

The clothes are sold depending on the size.

For ten years, Washington has heard a lot of stories of from his customers expressing their gratitude to the Santo Niño. But one thing story struck him most— his family’s story.

(I have heard of many stories of thanksgiving but it’s my family’s story that is my favorite. Because of the grace of the Señor, my mother, father and siblings are all in good health. That is why my being able to run this stall where I change the clothes of the Santo Niño is for me a grace from Him that I am and my family will always be thankful for.)

Although there are times when business is slow and he goes home almost empty-handed, Cañete’s faith does not waver. He says he is still very thankful for all the times he received so much more from the Santo Niño.

Washington says that on regular days, they consider it a good day to earn at least P1,000 but during the Sinulog season, he usually earns P5,000 and up per day.

(Sometimes, we earn nothing [chuckle] but there are times that it comes in abundance. I am thankful that he never leaves us [points to an image of the Santo Niño].)

Now that the Sinulog Festival is just around the corner, Cañete is preparing for the flock of costumers from around Cebu and from elsewhere who will find their way into his stall.

(It’s not the same every day during the Sinulog season but it never goes down to five customers each day. Most of those who want a new set of clothes for their images are just from Cebu, specially the balikbayans.)

Balikbayans are Filipinos who have settled abroad and who return to the country for a visit. Numerous Cebuanos and their families who now live in other parts of the world, particularly the U.S., come home to Cebu during the Sinulog Festival week as a form of pilgrimage and join in the religious events that culminate on the third Sunday of January, the Feast of Santo Niño, the same day that the festival also ends with a grand mardi gras-like parade.

This Sinulog 2020, he prays that the Señor will still listen to his prayers and that is to keep his family healthy and happy.

(I have no other prayer except that our family will remain happy and healthy … and that we will not be asked to leave the site where we are now.)/elb

WATCH: Meet 22-year-old Washington Villarin Cañete, a native of Cogon Pardo, who has been selling Santo Niño images and clothes for ten years now. Get to know his story as a vendor of Santo Niño statues and statuettes. #Sinulog2020SaCDND #PitSenyorKaSiloy!