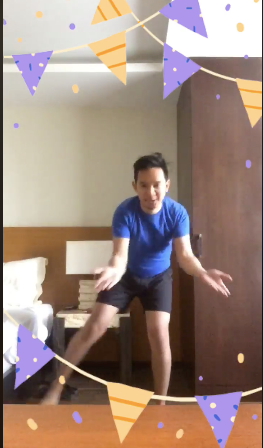 CEBU CITY, Philippines — You must be living under a rock if you haven’t heard of the Tala dance craze!

Tala, the song rendered by Pop Star royalty Sarah Geronimo, has resurfaced in 2019.

Several individuals and groups performed the dance and posted them on social media platforms.

The dance steps have since become the “anthem of the season.”

Boholano Ian Mark Corales, 26, took his performance to the next level as he performed the Tala dance steps with the Sinulog beat as the accompanying music.

“This actually happened last December 25. I had nothing to do and wanted to do something for fun, that is why I thought of incorporating Sarah G/ G force’s Tala choreography to the Sinulog theme. Just for fun and pampa-good vibes lang,” says Ian Mark.

Ian Mark will cross the ocean that divides Cebu and Bohol to attend the Sinulog Grand Parade on January 19, 2010. He will definitely perform the Tala dance steps to the Sinulog beat on the streets of Cebu.

See you on the streets, Ian Mark! / celr