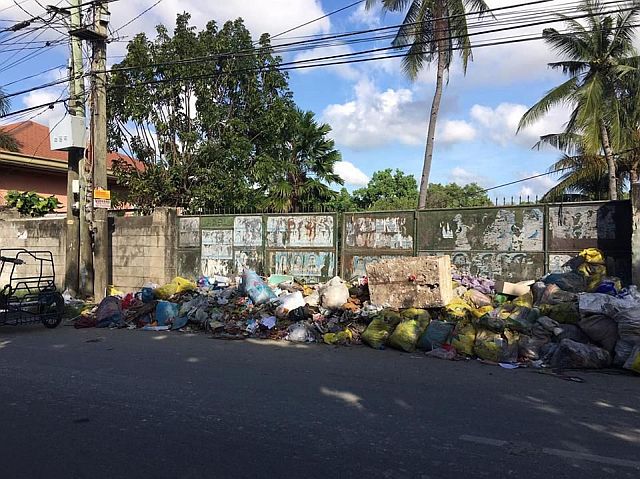 This area along the road in Sitio Tunga, Barangay Tanke in Talisay City has become a dump site with garbage piling up every day. |Contributed Photo

CEBU City, Philippines – While acknowledging the need to decongest community roads to alleviate traffic woes, barangay leaders in Cebu are calling on the Department of Interior of Local Government (DILG) to set guidelines in clearing barangay roads.

This developed after DILG in Central Visayas (DILG-7) announced that they will be giving all barangays in Central Visayas 75 days to comply with the department’s directive to ensure that on barangay roads are free from any obstruction.

Provincial Board (PB) Member Celestino Martinez III, who heads the Association of Barangay Councils (ABC) – Cebu Chapter, however said that providing the barangays with guidelines will help them in achieving DILG’s instructions.

He added that DILG will need to set these guidelines as it will also help village chiefs in tackling problems that may arise during road clearing operations such as land disputes, and territorial boundaries between neighboring barangays.

“Guidelines must really be set forth though. Problems might arise in some instances wherein, for example, roads within barangays that have not been formally donated and are still privately owned, will need immediate reconciliation… disputed barangay territorial boundaries and other issues,” said Martinez.

“Implementing easement of roads eases traffic and congestion especially in major thoroughfares. It is a must. Although the barangays can further assist in its implementation and enforcement, still we are dependent upon the local executives in any LGU (local government unit) since they would need assistance from local enforcement such as PNP (Philippine National Police), and other departments  especially implementation in highly urbanized areas and city streets,” he added. /elb