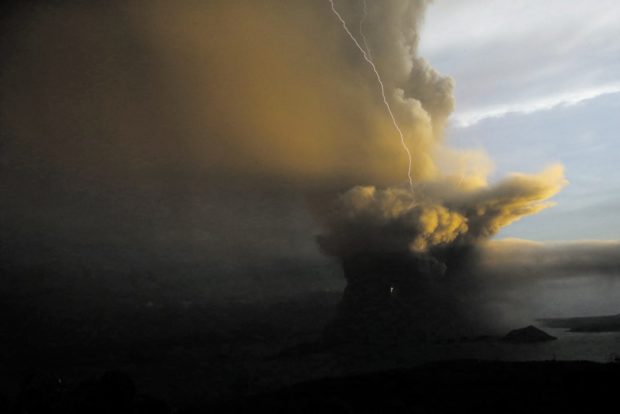 Lightning strikes as volcanic activities intensify on a rainy Sunday afternoon, as shown in this photo taken from Picnic Grove in nearby Tagaytay City on Jan. 12, 2020. (Photo by RICHARD A. REYES / Philippine Daily Inquirer)

MANILA, Philippines — Taal Volcano belched less lava and ash on Tuesday, but it was not an indication that the volcano was quieting down and that villagers who fled its fury on Sunday could now return to their homes.

Things may look less threatening on Volcano Island’s surface, but beneath it magma — molten rock — is rising and an explosive eruption is imminent, according to the Philippine Institute of Volcanology and Seismology (Phivolcs).

Phivolcs maintains its alert level on Taal at 4 out of 5, meaning “a hazardous explosive eruption is possible within hours to days.” Level 5 means a hazardous eruption is under way.

Briefing reporters in Malacañang on Tuesday, Phivolcs Director Renato Solidum said residents who fled their villages around the volcano on Sunday should not take the easing of activity on Taal as a sign that danger was now over.

“Alert level 4 is the warning for the possible hazardous explosive eruption. When that happens, if that really happens, they can’t return to the area because it will be really devastated,” Solidum said.

He said Taal’s previous eruptions had lasted months so it was impossible to predict an end to the current activity.

The alert warning of a potentially catastrophic explosive eruption, Solidum said, might remain in place for weeks, depending on developments.

In the past 24 hours, he said, geologists had recorded lava fountaining and hydrovolcanic activity — interaction of water and magma.

Taal suddenly came to life on Sunday, belching ash and steam columns that rose up to 15 kilometers into the sky and showering ash on a wide area, including Metro Manila.

The national government and the local governments in the municipalities on the rim of Taal Lake evacuated close to 16,000 people, who now jam 75 evacuation centers in the provinces of Batangas and Cavite.

At the press briefing in the Palace on Tuesday, Office of Civil Defense Director Casiano Monilla said local governments were trying to evacuate all residents of villages within the 14-km radius danger zone designated by Phivolcs.

Monilla said priority was being given to people in the evacuation. Farm animals and pets will be evacuated later, he said.

Solidum said there was danger not only from a vertical eruption column but also from a likely pyroclastic density current, or base surge.

A base surge is a speeding, flowing mixture of gas and rock fragments ejected during volcanic eruptions that may reach as far as 14 km, based on data and deposit found from the 1754 eruption of Taal, Solidum said.

A base surge destroys anything in its path, he added.

Solidum called on the public not to spread disinformation, like Mayon Volcano had also begun to act up.

At Phivolcs headquarters on Tuesday, Maria Antonio Bornas, the institute’s chief senior research specialist, told reporters that there was a possibility that conditions on Taal would progress to intense volcanic activity at the main crater, which was blown open by Sunday afternoon’s phreatic eruption.

“Less surface activity does not mean the danger is over. We have always reiterated that the possibility is always there since [the crater] is now open. If there is magma underneath, it will rise faster,” Bornas said.

Bornas reported that new fissures had been observed in Taal’s caldera region.

She said the fissures indicated that the top of the volcano had been depressurized and that a great volume of magma was pushing up, which would result in an explosive eruption.

Bornas said fissures had been seen in Sinisian, Mahabang Dahilig, Dayapan, Palanas, Sangalang and Poblacion in Lemery; Pansipit in Agoncillo; Poblacion 1, 2, 3 and 5 in Talisay; Poblacion in San Nicolas, and across the road connecting the towns of Agoncillo and Laurel—all in Batangas.

Phivolcs recorded 49 volcanic earthquakes between 2 a.m. and 10 a.m. on Tuesday. Seven of the quakes were felt at intensities 2 to 4 in Tagaytay City.

Bornas said magma was not expected to come out of the fissures.

“Magma won’t come out from there. Fissures just deform the caldera,” she said.

—With a report from AFP