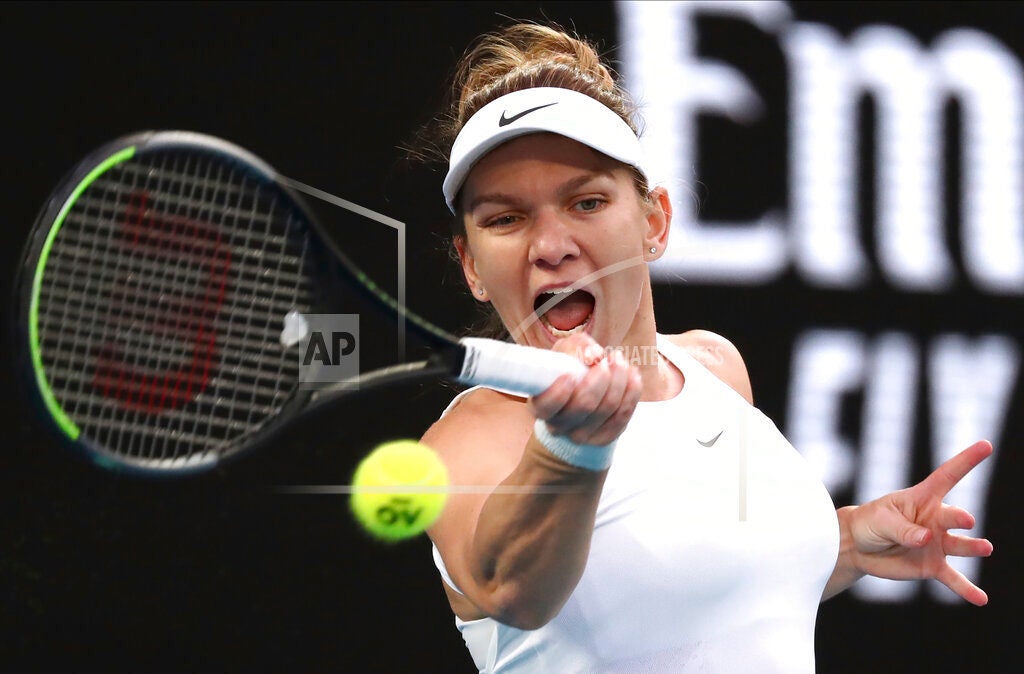 MELBOURNE, Australia (AP) — The Latest on the Australian Open (all times local):

Wimbledon champion Simona Halep has beaten British qualifier Harriet Dart 6-2, 6-4 to advance to the third round.

It was a difficult start to the day with showers and with outdoor courts that needed to be washed with high-pressure hoses because of overnight rain combined with a dust storm to the northwest of the city. The weather improved and organizers were getting through the bulk of singles matches, although 13 doubles matches had to be postponed.

Seventh-seeded Alexander Zverev also advanced about the same time with a 7-6 (5), 6-4, 7-5 win over Egor Gerasimov. Zverev has pledged $10,000 toward the bushfire recovery effort in Australia for every match he wins in Australia, and promised to donate his full prize money if he claims his first major title this year in Australia.

Zverev had plenty of support on Rod Laver Arena. Fifth-seeded team had to deal with a partisan crowd on another covered court at Melbourne Arena, but enjoyed the occasion.

“It was a tough match. Alex played great, with great crowd support. Great fun,” Thiem said. “”It’s nice to play with such atmosphere.

Venus Williams is not quite done at the Australian Open.

The owner of a total of 23 Grand Slam titles — seven in singles, 14 in women’s doubles with younger sister Serena, two in mixed doubles — has entered the mixed competition at Melbourne Park.

She hasn’t won a mixed doubles championship at a major in 22 years, when she and Justin Gimelstob took home the trophies from the 1998 Australian Open and French Open.

Her partner this time is Juan Sebastian Cabal.

He is currently ranked No. 1 in men’s doubles after winning Wimbledon and the U.S. Open in 2019 with Robert Farah, who was provisionally suspended by the International Tennis Federation this week pending a disciplinary hearing after failing a drug test.

The 39-year-old Williams was eliminated in the first round of singles in Australia on Monday by 15-year-old Coco Gauff.

Williams was the oldest entrant in women’s singles; Gauff was the youngest.

Angelique Kerber is through to the third round after beating Australian wild-card entry Priscilla Hon 6-3, 6-2.

At Melbourne Park in 2016, Kerber became the first German woman since Steffi Graf in 1999 to win a Grand Slam singles title. She won the U.S. Open later that year and Wimbledon in 2018.

Kerber will next play either Svetlana Kuznetsova or Camila Giorgi.

It’s been two full years since CiCi Bellis was healthy enough to participate in a Grand Slam tournament.

And now, four arm operations later, the 20-year-old Californian is back — and has beaten a seeded opponent to reach the Australian Open’s third round.

Bellis eliminated No. 20 Karolina Muchova of the Czech Republic 6-4, 6-4 on Thursday.

Bellis was a teen prodigy, winning a U.S. Open match at age 15 and reaching No. 35 in the rankings at 17. All the time away from the tour because of injuries has her at No. 600 right now, but she was able to get into the draw at Melbourne Park via the protected ranking rule.

Fourth-seeded Daniil Medvedev needed a medical timeout for a nose bleed before beating Spanish qualifier Pedro Martinez 7-5, 6-1, 6-3 and advancing to the third round.

The U.S. Open finalist called for a medical timeout while leading 5-0 in the second set and needed treatment to stop the bleeding.

Medvedev fended off four breakpoint chances to hold in the sixth game of the third set, and finished off strongly.

Second-seeded Karolina Pliskova continued her strong recent form at the Australian Open by advancing to the third round with a 6-3, 6-3 win over Laura Siegemund.

“I’m happy to get through — this was an ugly match for me,” she said.

The rain at Melbourne Park has abated and play is underway on about half the outdoor courts after they had to be washed down due to an overnight dust storm.

Rain and an overnight dust storm from the northwest of Melbourne is playing havoc with the Australian Open schedule.

First heavy morning showers delayed play on all outside courts. That combined with an earlier dust storm left a layer of red on some outside courts, making them unplayable in the morning.

Melbourne Park staff used high-pressure hoses to clean court surfaces before light rain showers began falling in the early afternoon, forcing officials to close the roofs at the three main arenas. The rain became heavier later, and suspended play in the only two matches that had started on outside courts.

Heavy morning rain showers delayed play on the outside courts from at least 90 minutes to up to three hours. Play began on schedule as well on the other two venues with retractable roofs — Rod Laver Arena and Margaret Court Arena.

The rain stopped late morning and the weather is mostly cloudy with gusting winds.

Morning rain has delayed the start of play on outside courts at the Australian Open by one hour.

The sun was shining and the rain had cleared at Melbourne Park when play started on the three covered arenas but the outside courts were still wet from from earlier heavy showers.

The forecast was for clear but windy conditions for the remainder of the day.

Read Next
James closes on Kobe, Davis has 28 as Lakers beat Knicks