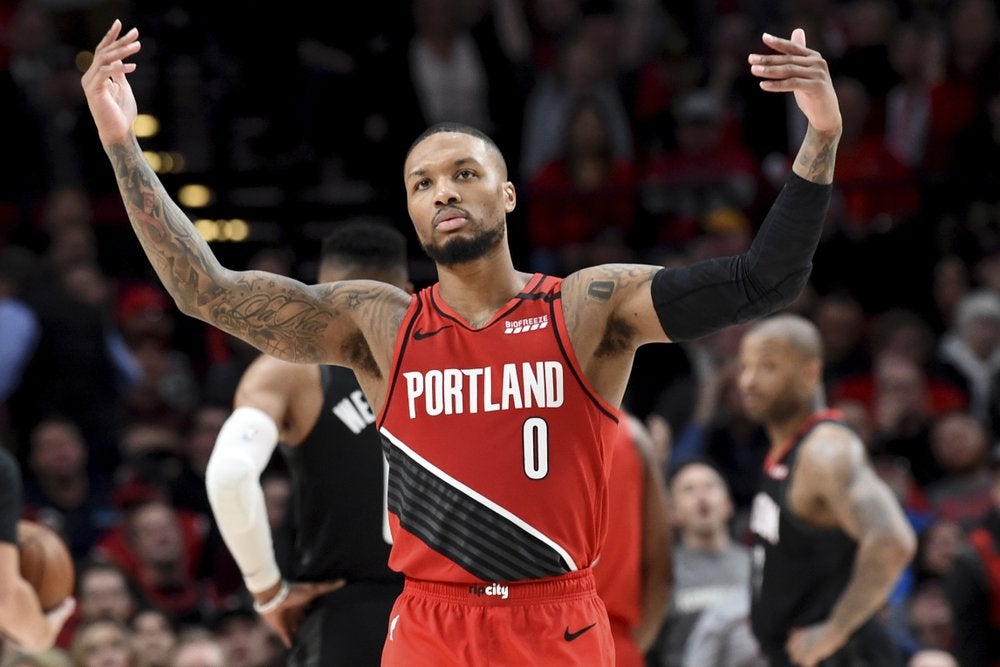 The list of competitors for the 3-point contest this season includes Portland’s Damian Lillard. | AP photo

The NBA is changing the format to this season’s 3-point contest at All-Star Saturday Night in Chicago by adding a pair of deep shots that will be worth three points apiece.

Competitors were told of the changes in the past few days, and the NBA announced the change Tuesday night (Wednesday morning, February 5, 2020, Philippine time).

The two additional shots will come from six feet beyond the 3-point line, between the racks located on the wings and the one at the top of the key.

Those shots — only one from each spot called the MTN DEW Zone — will be taken with a special green ball.

All-Star Saturday is Feb. 15, one night before the All-Star Game.

Robinson said he was looking forward to the new format and the two deeper shots.

“More shots the merrier. I’ve got no problem with that,” Robinson told AP. “I hardly ever get a shot pressed up against the line unless it’s coming off an action or something. I’m more comfortable maybe a step off the line.”

The change is being made in part to stay consistent with the times, since NBA players are shooting more shots from deeper distances than ever. There have been nearly 300 shots made from at least 30 feet this season, already more than the total from last season.

The rest of the format for the 3-point contest — five shots per rack, five different racks, most shots worth one point and a special “money ball” worth two points — remains unchanged. There is one rack composed of five “money balls,” which a shooter can place at any of the competition’s five regular spots.

The maximum score that can be reached is now 40, six more than the previous maximum.

Lillard, Hield, Bertans, Graham, Robinson and Young all rank among the NBA’s top 10 in 3-pointers made per game this season. LaVine made 13 3-pointers against Charlotte on Nov. 23, the top single-game effort in the NBA this season.

Robinson, at nearly 44 percent this season, has the best 3-point percentage entering Tuesday’s games of any of the eight selected for this year’s contest.

Lillard and Young are All-Stars this season. Harris is the defending champion. Bertans, Graham, LaVine, Robinson and Young are all first-time 3-point contest participants. Harris and Hield are in for the second time and Lillard is entering for the third time.

The Los Angeles Lakers’ Dwight Howard, the 2008 slam dunk contest champion, will be back in this year’s dunk event as well. He’ll be joined by a pair of former dunk contest runner-ups — Orlando’s Aaron Gordon and Miami’s Derrick Jones Jr. — as well as first-timer Pat Connaughton of Milwaukee.

Howard is competing for the first time in 11 years.

This is the first time Chicago has played host to All-Star weekend since 1988 — the year that Michael Jordan took off from the foul line to beat Dominique Wilkins for the dunk title.

“Chicago is historical, and that’s partly the reason why I’m doing it,” Gordon said Tuesday night in an interview on TNT.

The skills contest field is loaded, with four former champions and five All-Stars in the eight-player event. Reigning champion Jayson Tatum of Boston will aim to defend his title and try to join Miami’s Dwyane Wade (2006, 2007) as the only back-to-back winner of the event.

The Heat are the only team with representation in every event at All-Star weekend — Jimmy Butler and Adebayo in the game, Kendrick Nunn and Tyler Herro in the Rising Stars game, plus Jones in the dunk contest, Robinson in the 3-point event and Adebayo in the skills competition.

“As we should. We’ve got a lot of guys that are really good, that are making their name in this league, making their mark, showing what they’re capable of,” Butler said. “And I’m happy for them because they definitely deserve it. They’re in here all the time working on their game, studying everyone else’s game around the league and that’s what happens — you get recognized.”

Read Next
What about cats, dogs left behind in Wuhan?