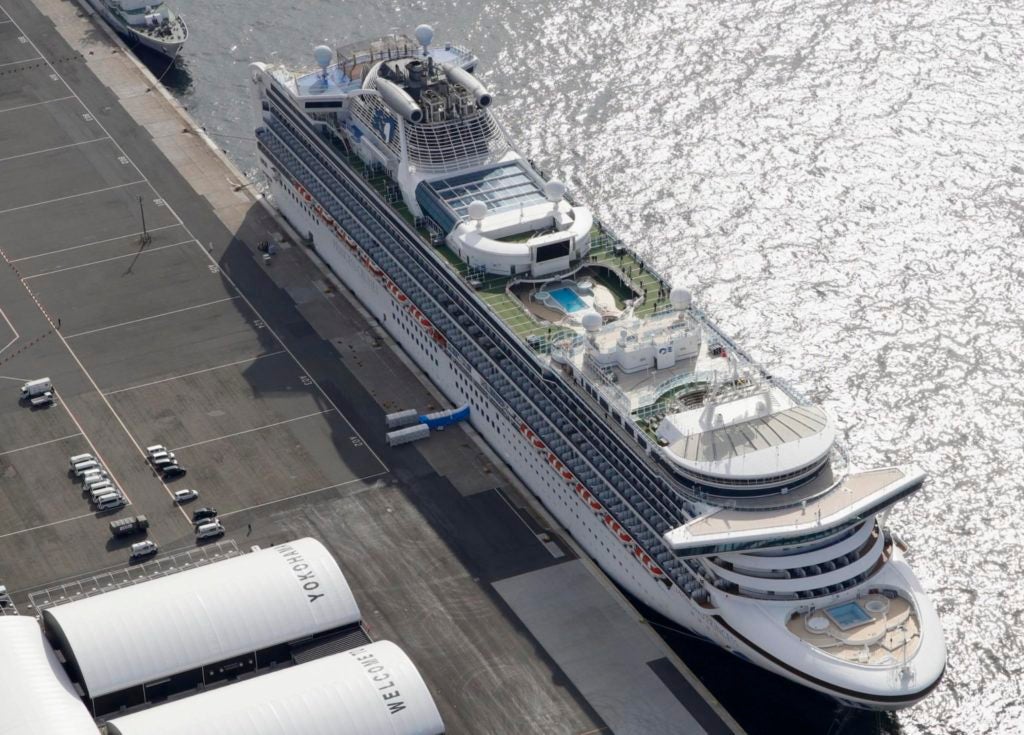 The cruise ship Diamond Princess is docked at Yokohama Port, near Tokyo, Friday, Feb. 7, 2020. Japan on Friday reported 41 new cases of a virus on the cruise ship that’s been quarantined. About 3,700 people have been confined aboard the ship. (Sadayuki Goto/Kyodo News via AP)

BEIJING  — Japan on Friday reported 41 new cases of a virus on a cruise ship that’s been quarantined in Yokohama harbor while the death toll in mainland China rose to 636, including a doctor who got in trouble with authorities in the communist country for sounding an early warning about the disease threat.

Two docked cruise ships with thousands of passengers and crew members remained under 14-day quarantines in Hong Kong and Japan.

Before Friday’s 41 confirmed cases, 20 passengers who were found infected with the virus were escorted off the Diamond Princess at Yokohama near Tokyo. About 3,700 people have been confined aboard the ship.

Meanwhile, a newborn discovered infected 36 hours after birth has become the youngest known patient. The number of people infected globally has risen to more than 31,000.

Dr. Li Wenliang, 34, had worked at a hospital in the epicenter of the outbreak in the central city of Wuhan. He was reprimanded by local police for “spreading rumors” about the illness in late December, according to news reports. The outbreak has spread to some two dozen countries, triggering travel restrictions and quarantines around the world and a crisis inside the country of 1.4 billion.

The World Health Organization tweeted: “We are deeply saddened by the passing of Dr Li Wenliang. We all need to celebrate work that he did” on the virus.

Within a half-hour of announcing earlier Friday that Li was in critical condition, the hospital received nearly 500,000 comments on its social media post, many of them from people hoping Li would pull through. One wrote: “We are not going to bed. We are here waiting for a miracle.”

Li was among a number of medical professionals in Wuhan who tried to warn colleagues and others when the government did not, The New York Times reported earlier this week. It said that after the mystery illness had stricken seven patients at a hospital, Li said of them in an online chat group Dec. 30: “Quarantined in the emergency department.”

Another participant in the chat responded by wondering, “Is SARS coming again?” — a reference to the 2002-03 viral outbreak that killed hundreds, the newspaper said.

Wuhan health officials summoned Li in the middle of the night to demand he explain why he shared the information, and police later forced him to sign a statement admitting to “illegal behavior,” the Times said.

“If the officials had disclosed information about the epidemic earlier,” Li said in an interview in the Times via text messages, “I think it would have been a lot better. There should be more openness and transparency.”

A baby born last Saturday in Wuhan and confirmed positive just 36 hours after birth became the youngest known person infected with the virus, authorities said. But precisely how the child became infected was unclear.

“The baby was immediately separated from the mother after birth and has been under artificial feeding. There was no close contact with the parents, yet it was diagnosed with the disease,” Zeng Lingkong, director of neonatal diseases at Wuhan Children’s Hospital, told Chinese TV.

Zeng said other infected mothers have given birth to babies who tested negative, so it is not yet known if the virus can be transmitted in the womb.

Altogether, more than 50 million people are under virtual quarantine in hard-hit Hubei province in an unprecedented — and unproven — bid to bring the outbreak under control.

In Hong Kong, hospital workers demanding a shutdown of the territory’s border with mainland China were still on strike. The territory’s leader Carrie Lam announced a 14-day quarantine of all travelers entering the city from the mainland starting Saturday, but the government has refused to seal the border entirely. Taiwan has said it will refuse entry to all non-citizens or residents who have recently visited Hong Kong, Macao or China beginning Friday.

Testing of a new antiviral drug was set to begin on a group of patients Thursday, the official Xinhua News Agency reported. The drug, Remdesivir, is made by U.S. biotech company Gilead Sciences.

From Europe to Australia and the U.S., universities that host Chinese students or have study-abroad programs are scrambling to assess the risks, and some are canceling opportunities and prohibiting student travel.

Central banks in the Philippines and Thailand have cut their interest rates to fend off economic damage from the outbreak in China, the world’s second-biggest economy, with 1.4 billion people. China is a major source of tourists in Asia, and corporations around the world depend on its factories to supply products and its consumers to buy them.

The organizers of the Tokyo Olympics again sought to allay fears that the 2020 Games could be postponed or canceled because of the crisis.