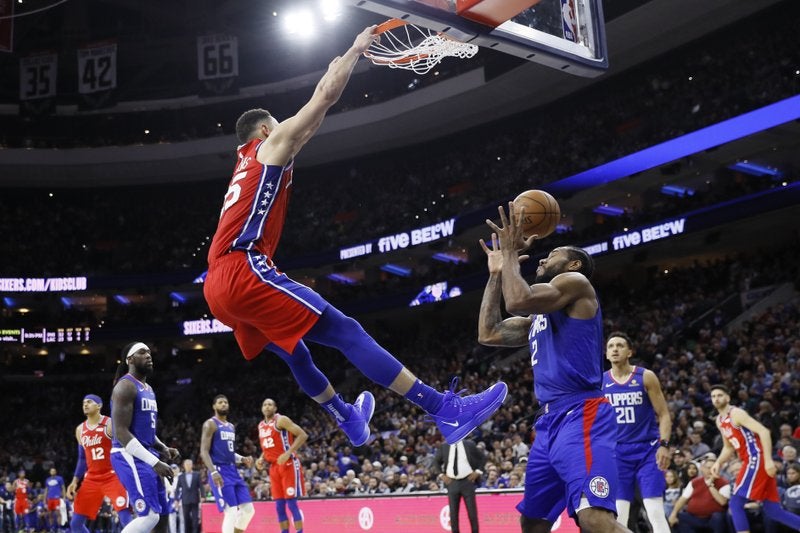 Joel Embiid also scored 26 points and Tobias Harris added 17 points and 12 boards for Philadelphia, which has the NBA’s best home record at 25-2. Josh Richardson scored 17 of his 21 points in the fourth quarter.

Richardson nailed his third 3-pointer of the quarter to give Philadelphia a 102-94 lead with 4:44 left. Then he scored on a driving left-handed layup and made the free throw to complete the 3-point play, extending the lead to 11.

Playing 28 minutes in just his ninth NBA game, Williamson used his 6-foot-6, 285-pound frame, quick feet and explosive vertical to have his way with every defender Portland tried against him.

JJ Redick scored 20 and Josh Hart had 17 points for New Orleans, which trailed by as many as 16 in the first quarter before taking command en route to a third straight victory.

Portland star Damian Lillard scored 20 points — less than half of his 42-point average over his previous 10 games. But his playing time was limited in the fourth quarter when the Pelicans, who led by as many as 26, had put the game out of reach.

Bradley Beal scored 30 points, and the Wizards held off Zach LaVine and the Bulls for the victory.

Rui Hachimura added 20 points for Washington, which won for the fourth time in six games. Shabazz Napier and Ian Mahinmi had 15 apiece.

LaVine scored 19 of his 41 points in the fourth quarter as the Bulls whittled an 18-point deficit down to six points.

Tomas Satoransky added 19 points for Chicago, which enters the All-Star break on a six-game losing streak. The Bulls had won four straight versus Washington.

LaMarcus Aldridge had 25 points and 14 rebounds, and the Spurs stopped a five-game slide.

Led by Aldridge and Murray, the Spurs made 25 of 27 foul shots.

Oklahoma City dropped its second straight after a stretch of nine wins in 10 games. Chris Paul scored 31 points for the Thunder, and Shai Gilgeous-Alexander had 17.

San Antonio played without leading scorer DeMar DeRozan, who was sidelined by back spasms.