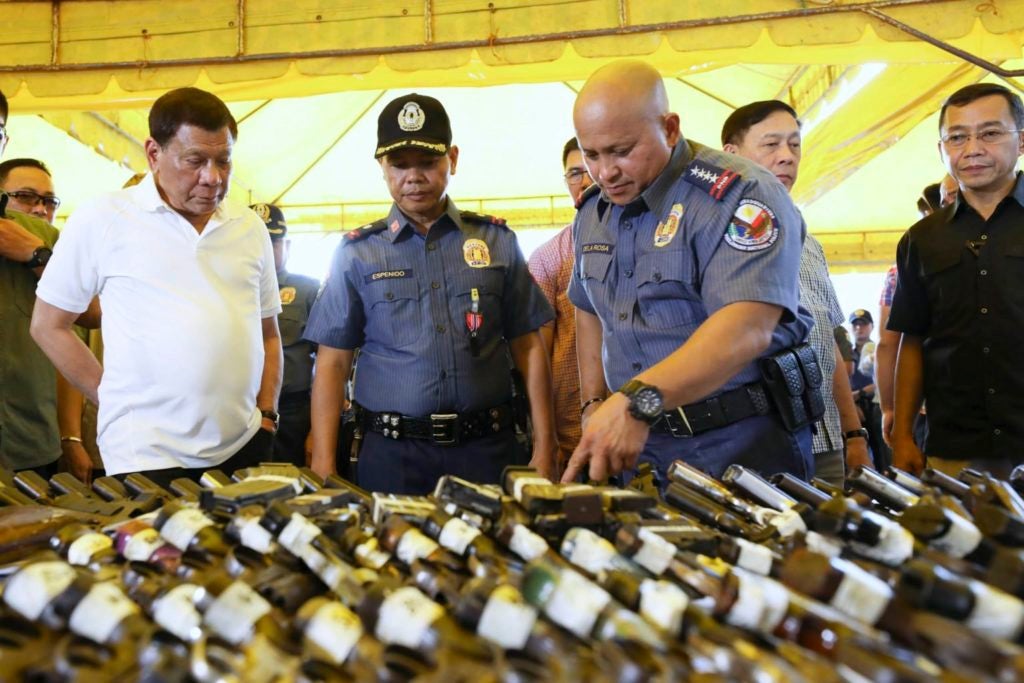 Interior Secretary Eduardo Año confirmed on Thursday that Lt. Col. Jovie Espenido—who became controversial for his hard-hitting campaign against illegal drugs—was relieved from his post as Bacolod City police chief after he was added to President Rodrigo Duterte’s so-called narcolist.

The disclosure prompted lawmakers to raise fresh questions about the conduct of Mr. Duterte’s brutal drug war, even as Espenido’s former associates who are now in the Senate vouched for his character.

“That’s true,” Año told the Inquirer when asked if Espenido’s name was on the narcolist. But the Cabinet official added that Espenido “will also undergo validation and possible investigation.”

Espenido declined the Inquirer’s request for an interview.

One of the enforcers of Mr. Duterte’s war on drugs, Espenido was the police chief of Albuera, Leyte province, in 2016 when Rolando Espinosa Jr., then the town’s mayor who was detained for being an alleged drug lord, was killed in his cell by policemen who claimed they were serving a search warrant.

A month later, Espenido was removed from his post after he was named by Espinosa’s son, Kerwin, as the conduit to Ronnie Dayan, the alleged bagman of Sen. Leila de Lima, whom the Duterte administration had detained on drug trafficking charges.

Kerwin Espinosa, who is now detained by the police, had testified in a Senate hearing that Espenido used to accept bribes. Former Philippine National Police chief Ronald dela Rosa, who was elected senator last year, said that when he confronted Kerwin, the younger Espinosa said he was only speaking out of anger.

From Albuera, Espenido was transferred to Ozamiz City. On July 31, 2017, the Criminal Investigation and Detection Group led the police operation that resulted in the killing of Ozamiz Mayor Reynaldo Parojinog Sr. and 14 others in a raid on the mayor’s home.

Like Espinosa, Parojinog was identified by the President as a drug lord.

On Oct. 8 that year, Judge Edmundo Pintac of the Ozamiz Regional Trial Court Branch 15 was shot dead by four men on two motorcycles as he was driving home. About a week later, Espenido was transferred to Catanduanes on orders of then PNP chief Oscar Albayalde.

Espenido would be reassigned anew to Samar, until Mr. Duterte ordered his transfer back to Ozamiz in November.

In October 2019, Espenido was transferred to Bacolod City. Mr. Duterte, who described the city as being “badly hit” by drugs, said his marching orders to him were: “Go there, you are free to kill everybody.”

Año said Espenido was in the second batch of names added to Mr. Duterte’s narcolist, but was unsure when Espenido’s name was included.

He said Mr. Duterte did not express concern over the police official’s inclusion because he and others on the list are subject to “continuing validation.”

Being on the list “does not mean that you are automatically involved in the illegal drug trade,” the secretary said. “That’s why the PNP chief will relieve all 357 (policemen) on the narcolist and validate them one by one and, if possible, and if there is information or data available, then conduct an investigation.”

According to him, Mr. Duterte had given PNP chief Archie Gamboa the go-ahead to investigate the 357, including Espenido. This was the reason Espenido was transferred from Bacolod to the Office of the PNP Chief at Camp Crame, Quezon City, said Año.

In an interview on Thursday, Gamboa said he gave investigators about a month to evaluate the 357 policemen.

PNP spokesperson Brig. Gen. Bernard Banac said policemen who had chosen to avail themselves of retirement would still be investigated.

“For those who availed [themselves] of early retirement, if evidence will be found later establishing their link [to] the illegal drug trade, their names will be included again in the drug watch list for civilians,” he said.

Sen. Panfilo Lacson, a former PNP chief who had worked with Espenido, said he remembered the police official as someone who performed with “integrity and dedication” when he led the Presidential Anti-Organized Crime Task Force during Joseph Estrada’s presidency.

“At least that was how I knew him in the many instances that he faced those challenges,” Lacson said.

The senator said he hoped reports that Espenido was involved in the drug trade were untrue.

“If indeed Espenido is now involved in illegal drugs and I hope it isn’t the case, I can only assume that he succumbed to the lure of big money that is the root of all temptations that police officers like him failed to resist,” Lacson said.

“It is unfortunate because no less than President Duter­te personally took notice of his accomplishments and performance in the many assignments that he handled,” Lacson added.

“Give him opportunity for either or both and he will show his real self,” the senator said.

In a text message, Dela Rosa said regarding Espenido, “I can vouch for him. His relief is just a matter of procedure in order to clear him or pin him depending on the results of the validation.”

De Lima said it was “ironically amazing” that Espenido was now being linked to illegal drugs.

“Espenido must know a lot to make him a target himself. Has he lost his usefulness? Or is he now a threat to his top boss because of what he [Espenido] knows?” she said.

“Let’s see how this new mystery would unravel in the increasingly messy terrain we now have under an unstable leader,” De Lima said. —REPORTS FROM JEANNETTE I. ANDRADE, LEILA B. SALAVERRIA, MARIELLE MEDINA, CARLA GOMEZ, MELVIN GASCON AND JULIE M. AURELIO