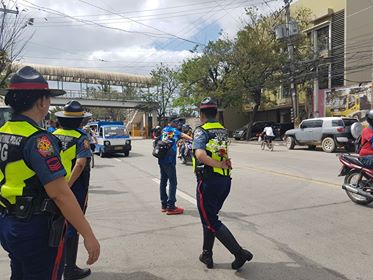 CEBU CITY, Philippines — Instead of giving violation tickets or temporary operator’s permit (TOP) to the drivers and motorists flagged down by cops on Cebu City’s streets, the Highway Patrol Group in Central Visayas (HPG-7) instead handed out chocolates and flowers during their regular checkpoint along V. Rama Avenue on Valentine’s Day, February 14, 2020.

The HPG-7’s Valentine Day activity dubbed as “Gugma sa HPGnalang sa mga Motorista” was initiated by their head, Police Colonel Joel Pernito, who wanted to have a creative way of reminding the drivers and commuters about the rules and regulations for safe travel on roads and highways.

Police Captain Michael Gingoyon, provincial officer of HPG-7, said the activity was their way of expressing their love to the riding public, by reminding to follow the road rules through the small gifts they prepared.

(In line with our road safety awareness, we wanted to show that we also care for our motorists.)

One of the flagged down drivers was Nympha Pinote, of Barangay Mambaling,  who was with her family to visit a private hospital in Fuente.

Pinote told reporters she was very nervous when she was told to stop by a Highway Patrol policeman, thinking she would get arrested as she was also not wearing her seatbelt when she rolled down the window of her car.

“Gikuyawan ko kay sukad-sukad wala pagyud ko madakpan (I was nervous because I thought they will arrest me. I was never arrested before),” said Pinote, who grinned when she found herself a recipient of the Valentine’s Day gift from the HPG-7 cops.

A student who was crossing the road while the HPG-7 performed their gimmick, also received some chocolate hearts.

Nikko Baylon, 24, from Barangay Mambaling, said it was his first time to witness policemen handing some flowers and chocolates on the street.

“Sa HPG-7 thank you so much for making us happy today,” said Baylon.

According to Gingoyon, although they were not issuing tickets of violation, they still reminded each drivers and passengers to follow the road safety rules in order to avoid accidents. /elb