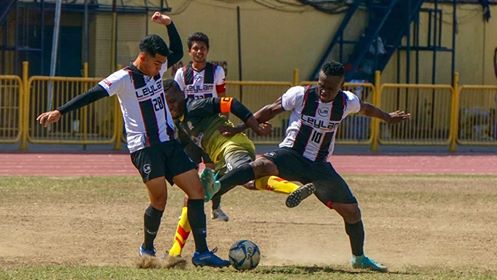 CEBU CITY, Philippines – The University of Cebu (UC) Kajitech opened their title quest with a 3-2 edging of the Don Sacredale, Sunday, February 16, 2020 at the Cebu City Sports Center in the Men’s Open Division I of the 21st Aboitiz Football Cup.

Joseph Limana scored the early goal for UC when he found the back of the net just three minutes into the match. It took 22 minutes for Don Sacredale to score the equalizer on Wilfred Villaren’s goal in the 25th minute.

Kenneth Bordalba gave UC a one-point lead, 2-1, with his goal in the 38th minute. Another early goal, this time in the second half, by Kurt Cuizon put UC further ahead at 3-1.

However, Don Sacredale came close at 3-2 on Nicholas Villacin’s goal in the 66th minute.

Both teams, however, were unable to score another goal until the endgame whistle sounded.

In the other match that was played, ERCO Bro’s challenge to defending champion Leylam FC ended in a scoreless draw.

Makoto FC, on the other hand, enjoyed a 5-1 win courtesy of University of San Carlos’ (USC) withdrawal in the tournament.

Organizing Central Visayas Football Association (CVFA) has decided that because USC had played one game in the tournament before deciding to withdraw, the resulting score of that one game will be reflected against all the other teams in the spirit of fairness.

USC’s one and only game played was against Leylam FC where they lost 5-1.

Thus with USC’s withdrawal and the draw, ERCO Bro is now enjoying the top spot with seven points owing to its win-loss-draw record of 2-0-1.

While Makoto, UC and Don Sacredale all have six points, Leylam FC has four points and USJ-R has three points. /elb