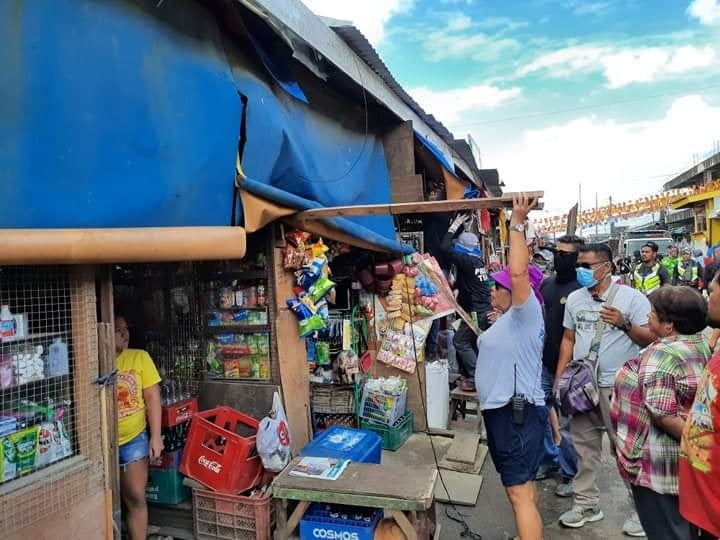 Raquel Arce (middle) was leading the clearing operation of a road in Barangay Ermita, Cebu City when information on her alleged death was shared with the media. | Photo grabbed from the PROBE Team Facebook page

But Arce was quick to deny said report.

She told reporters in an interview before noon time that she was well and alive.

A radio station shared with listeners on Tuesday morning information which they received on Arce’s reported death but the said report that was sourced from a Sitio Sudlon, Lahug resident was later on rectified.

Arce said that she was with PROBE Team members implementing a road clearing operation in a portion of the Carbon Public Market located near the vicinity of Barangay Ermita when she heard the news on her alleged death.

She said that she was well and that she did not have a hand in the implementation of the Lahug demolition because it involved a privately-owned property.

Mabolo police also denied having received information on a shooting incident that occurred in Sitio Sudlon.  What they received was information on an elderly resident who was injured after he was hit by debris coming from the demolished homes. Said resident was immediately taken to the hospital.

A personnel of the city’s Divison for the Welfare of Urban Poor (DWUP), who refused to be named for lack of authority, said that residents in the area did not resist the demolition of their homes.

Arce said she considers the report on her alleged death as a form of threat to her life, but she no longer intends to have the matter reported to the police.

She said that this was not the first time that she received a threat to her life because of her implementation of her responsibilities as PROBE chief.

Arce said that she could not also blame people for considering her a “villain” as a result of city-ordered demolitions that she has so far implemented.

(I hope people will also understand that PROBE is only doing its job to uphold the law. We are just doing our work.)

While she no longer wants to report to the police the threats to her life, Arce said that she will just have to be more vigilant to ensure her security.

“Magbantay lang gyod ko from now on. But that (threats) will not stop me from working,” she added. /dcb

Read Next
Team: ‘We are willing to help road clearing but some barangays are not cooperative’