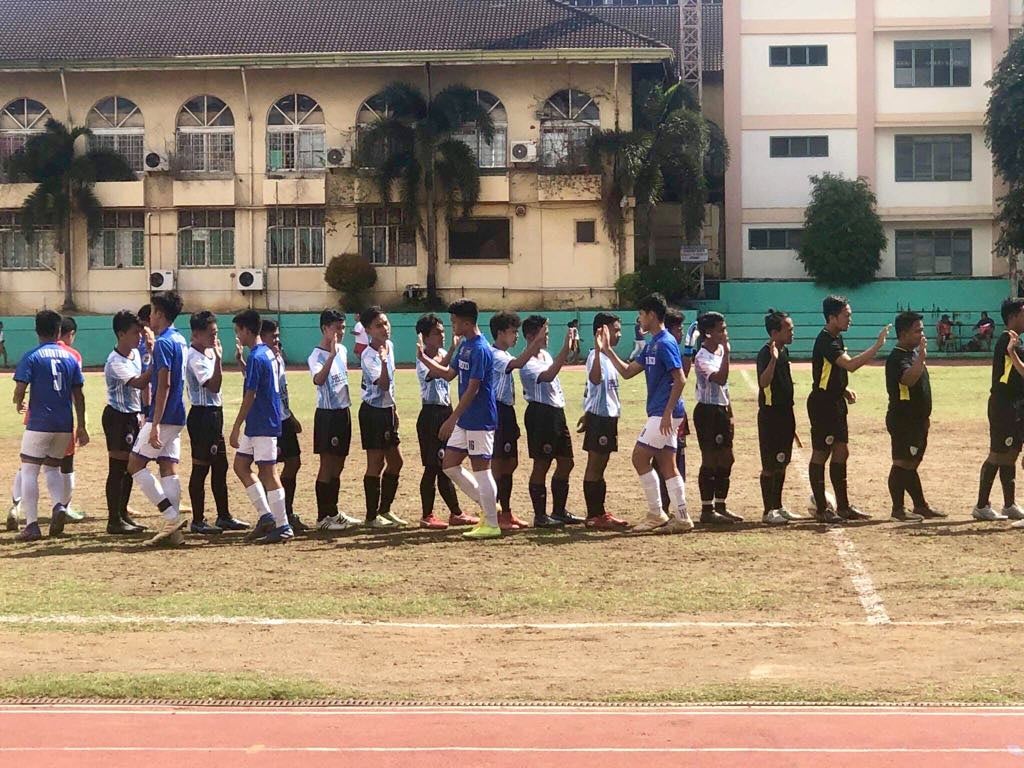 Players from Abellana National School and Don Bosco Technical College give each other high-fives prior to their semifinals match in the Boys 16 of the 21st Aboitizland Football Cup on Saturday, February 22, 2020 at the Cebu City Sports Center. | Mars G. Alison

CEBU CITY, Philippines — Ateneo de Cebu has a chance to become the champions of the Boys 16 and Boys 18 after clinching tickets to the finals of both categories in the 21st Aboitizland Football Cup on Saturday, February 22, 2020, at the Cebu City Sports Center.

Ateneo first advanced to the championship round of the Boys 16 via a 1-0 edging of the KNF Don Bosco Boys Home (DBBH).

Christopher Osawa gave Ateneo the finals ticket when he found the back of the net with just three more minutes left in the first half.

To contest the Boys 16 title against Ateneo is Abellana National School (ANS) who thrashed Don Bosco Technical College (DBTC) A, 4-1.

Mark Lester Zafra started the ball rolling  for ANS by scoring a brace in the 16th and 27th minutes of the match.

Francis Jay Vercide put ANS further up ahead at 3-0 in the 39th minute and Francis Yosores sealed the finals ticket for ANS in the 44th minute.

Louis Barro prevented a shutout for DBTC with his goal in the 55th minute.

It took a while for Ateneo to answer back but it eventually did with back-to-back goals from King Baclado in the 40th and Eric Balaga in the 42nd to bring Ateneo up by 2-1.

Christopher Osawa chipped in the last goal for Ateneo in the 59th minute.

USJ-R managed to hike up its goal to two courtesy of Dustin Drey Ramirez in the 69th but both teams failed to add to their goals until the endgame whistle.

DBTC salvaged its other semifinals match by blanking KNF DBBH, 2-0, to earn the right to face Ateneo for the Boys 18 title.

With a little more than 10 minutes left in the match, DBTC pulled through with goals from Vince Ybañez in the 78th and Josh Asignar in the 79th minute./dbs

Read Next
Road widening in N. Bacalso to continue after tree issues