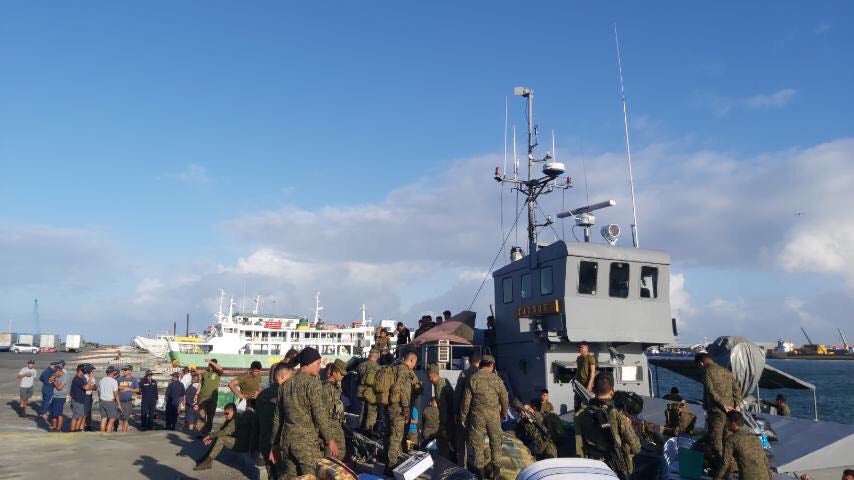 At least 100 Army soldiers from the Civil Military Operations Battalion will augment troops in the fight against the New People’s Army in Negros. | Photo courtesy of 303rd Infantry Brigade

The 100 troopers from the Civil Military Operations Battalion arrive aboard the BRP Tausug at the BREDCO Port in Bacolod City, Negros Occidental on Wednesday, February 26, 2020. | Photo courtesy of 303rd Infantry Brigade

Pasaporte said this as the more than 100 Army soldiers arrived last Wednesday, February 26, 2020 aboard the BRP Tausug of the Philippine Navy at the BREDCO Port in Bacolod City.

The more than 100 troopers will also be under the command of the 303rd Infantry Brigade based in Camp Gerona, Murcia town in Negros Occidental.

A report of the arrival of the Army soldiers in Bacolod City, however, was only released a day after their arrival on Thursday, February 27, 2020.

“We welcome the additional troops deployed in Negros to boost our efforts in our campaign against the Communist NPAs and to support the implementation of EO70, “ Pasaporte said in a statement.

However, Pasaporte told CDN Digital that some of the troops would be deployed early next month to the 302nd Infantry Brigade under Colonel Noel Baluyan in Negros Oriental to compliment the RCSP teams.

However, Pasaporte did not divulge the number of soldiers to be deployed here.

“We will be briefing them on the security, what to expect in Negros. May mga inputs on culture sensitivity. Importante yun na alam nila ang characteristics ng Ilonggo at Cebuano sa Oriental,” Pasaporte said.

The arrival of the troops is part of the government’s End Local Communist Armed Conflict (ELCAC) program according to Pasaporte.

“The Philippine Army is sincere in our mandate to support the Whole-of- Nation approach to End the Local Communist Armed Conflict in Negros Island.  With the support of the Local Government Units, other agencies and the communities we will achieved m a peaceful province free from the influence of Communist NPA,” Pasaporte added in a statement./dbs