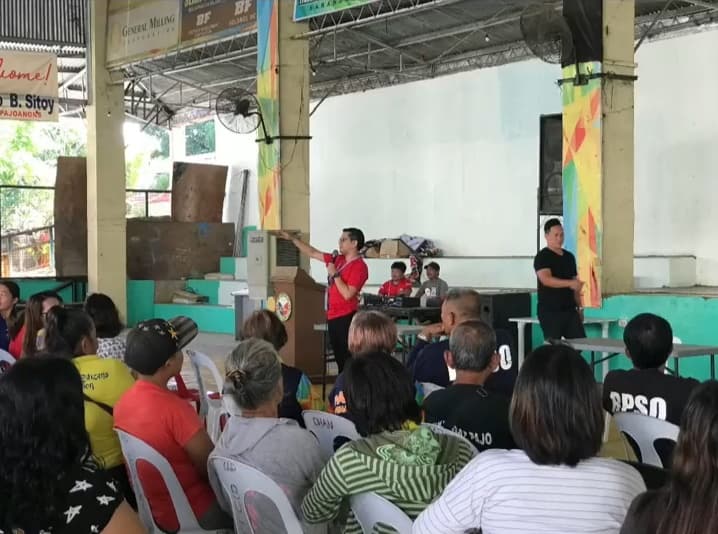 City of Lapu-Lapu Office of Substance Abuse Prevention personnel headed by its chief, Gary Lao, randomly pick out the barangay workers in Pajo to undergo a surprise drug test after the flag ceremony in the barangay gym on March 2, 2020. | Norman Mendoza

Gary Lao, City of Lapu-Lapu Office of the Substance Abuse Prevention (CLOSAP) head, told CDN Digital that the four persons were field workers and that one of them was a woman.

Lao also said that the findings of the drug tests would still be subject to confirmatory tests and the subject persons would be given the chance to explain or if they had taken medications.

The CLOSAP personnel randomly picked for the drug tests 81 persons from around 200 barangay workers and officials including Barangay Captain Lyndell Bullos after a flag ceremony at the barangay gym.

Lao said that Barangay Captain Bullos requested to have the drug test  in his barangay a few months ago.

He said that they did not inform Bullos about the date of the drug test until this morning.

Lao said he would recommend to Mayor Junard Chan to terminate the persons initially found positive after the confirmatory results would also turn out to be positive of illegal drugs.

“Ato gyud ipa-terminate sa mayor for them, and the government employees to know that we are serious in the fight against illegal drugs,”  said Lao.

(We should have them terminated by the mayor so that the government employees would know that we are serious in the fight against illegal drugs.)

Last week, the CLOSAP conducted surprise drug test to barangays Mactan, Punta Engaño and Santa Rosa to more than a hundred Barangay workers but none have tested positive of illegal drugs./dbs