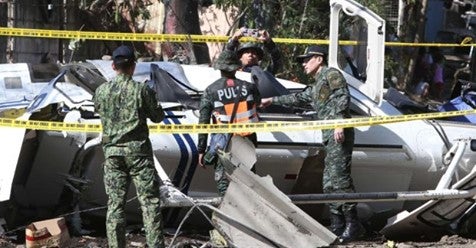 Philippine National Police chief Gen. Archie Gamboa and his aide, Capt. Kevin Gayramara, were discharged from St. Luke’s Medical Center in Taguig on Friday afternoon as investigators began their inquiry into the March 5 crash of the helicopter that carried Gamboa and seven others in Laguna.

Police Maj. Gen. Benigno Durana Jr. said Gamboa thanked everyone for their well wishes but asked for more prayers for the other, more seriously injured officials.

Durana said Gamboa planned to report for work on Monday. Durana took over the duties of PNP spokesperson Police Brig. Gen. Bernard Banac who was also on board the helicopter.

Interior Secretary Eduardo Año also asked for prayers for Ramos and Magaway as he explained that the PNP would have to forgo the use of their helicopters until a Special Investigation Task Group, headed by Police Lt. Gen. Guillermo Eleazar, completes its probe.

“Let us first check what caused the crash in order to avoid another incident,” he said.

The chopper, a two-year old Bell 429 twin-engine aircraft, crashed as it was taking off from an impounding site in Barangay San Antonio in San Pedro town in Laguna.

The P435-million Bell 429 was acquired through a supply contract awarded on June 28, 2017, to the Texas-based Bell Helicopter Textron Inc.

The PNP later acquired two more Bell 429 helicopters which were delivered in 2019.

“That is the same brand of chopper being used by the President, as well as by the Armed Forces of the Philippines,” he said.

Año conceded that there may have been a lapse in the preparation of the helipad and the chief of the village where the chopper crashed had earlier warned of the presence of high-tension power cables.

“All of these will be threshed out in the ongoing investigation,” he said.

At a press briefing, Eleazar said the crash inquiry will look into the airworthiness of the aircraft, the possibility of pilot error, or a supposed lapse in the selection of a landing zone.

Investigators are now gathering all pieces of the wreckage that, he said, can help in the investigation, including the possibility of submitting these for analysis by the aircraft manufacturer.

Eleazar appealed to residents at the crash site who may find pieces of the debris, or may have captured on video the actual landing and takeoff of the ill-fated chopper.

“They can just take a photo of the debris, and report this to the local police station. For videos, we ask people not [to] hesitate to share [with] us,” he said.

According to officials of the Civil Aviation Authority of the Philippines, the chopper did not have a black box because it was among the types of aircraft not required to have the device.

Eleazar said the PNP investigation needs to come out quickly with its findings, which will be the basis of fresh guidelines so that the police force can start using its choppers again.

He also vouched for the capability of the pilot, who, Eleazar said, has 23 years of flying experience. —WITH REPORTS FROM MARICAR CINCO, DELFIN T. MALLARI AND INQUIRER RESEARCH