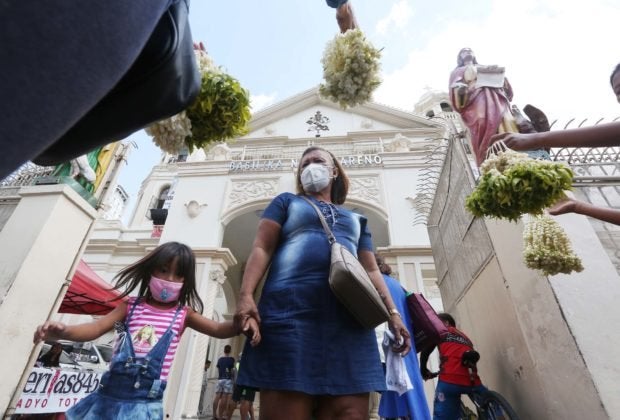 At least three Catholic dioceses in Metro Manila have decided to suspend the holding of Masses, weddings, baptisms and other religious activities as the National Capital Region goes into a “community quarantine” starting this Sunday to contain the spread of the new coronavirus disease (COVID-19).

The “Pahalik” for the image of the Black Nazarene at the Quiapo Church in the city of Manila—a longtime practice of allowing devotees to touch or kiss the statue—has also been suspended indefinitely.

In a pastoral letter on Friday, Manila Archdiocese Auxiliary Bishop Broderick Pabillo said there would be no Mass this Sunday in all churches under the archdiocese since it is suspending all activities from March 14 to March 20.

“I recognize that this may impact many faithful and priests, but let us do this with the spirit of sacrifice for the good of all,” said Pabillo, apostolic administrator of the Manila Archdiocese.

Pabillo instead urged the faithful to pray the Oratio Imperata against the virus every 8 p.m., to be followed by the praying of the rosary and Bible reading.

“The fervent prayers of all the people of God will draw us closer to him and away from the scourge of this disease,” Pabillo said.

Still, churches in Manila will remain open “so that people may come and find solace in silent prayer,” provided that sanitizers would be made available at the entrances and that the church’s premises were regularly cleaned. Individual confessions should still be entertained by priests, he added.

The diocese of Cubao, which has jurisdiction over parts of Quezon City, and the diocese of Pasig went further by suspending the holding of Masses “until further notice.”

Cubao Bishop Honesto Ongtioco announced the suspension of Masses in his diocese ahead of the meeting of the Metro Manila bishops on Friday night “to discuss our common guidelines during this lockdown situation.”

Priests in Cubao were also told not to schedule weddings and baptisms for the meantime. Those who have already booked such rites would be asked to postpone them.

“For weddings that are already scheduled and cannot be postponed, we will ask that they limit the number of attendees to the minimum. Only the couple, witnesses and parents will be allowed to attend. There will be no celebration of the Mass, just the wedding rites,” said Cubao Chancellor Fr. Frederick Edward Simon.

Similarly, baptisms would also be limited to the child, the parents and two godparents. “It is also advised that we use cotton balls when we anoint the head of the child with oil. The cotton balls used should be disposed of properly by burning them,” Simon added.

At least two government officials have also asked couples with wedding plans to defer the ceremony during the month-long quarantine period in Metro Manila.

Those who would insist on getting married must be mindful of the prohibition on “mass gatherings,” said Trade Secretary Ramon Lopez.

“For weddings, you can’t stop love, you know. If they push through with it, maybe they can cut down on the number of guests. They would also reduce their expenses. We should remember that mass gatherings are prohibited for now,” Lopez said.

Those who wish to postpone their weddings or other similar private events should be entitled to a refund from establishments that would serve as their venue, he said.

Cabinet Secretary Karlo Nograles, at a Palace press briefing on Friday, stressed the need for social distancing while in gatherings, citing weddings and receptions as an example.

“Social distancing is really the distance of an arm’s length. In a wedding, there’s the question of how the couple will kiss. There are many adjustments,” Nograles said, adding that social functions will “really have to be limited.”

“Love is timeless and boundless. What is a one-month postponement for love?” he asked.

Nograles said the government was still working out the guidelines for gatherings, such as Masses and worship services that will cover all religious sects.