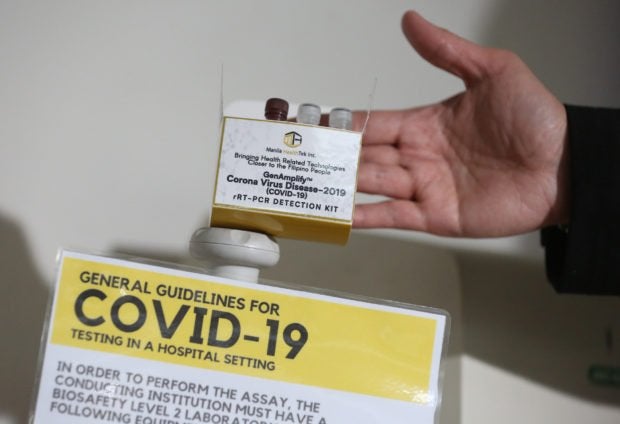 The COVID-19 test kit known as GenAmplify still has to undergo field testing before being rolled out commercially, but it has earned high praise for the team of Filipino scientists who developed it. |Inquirer.net file photo

At a press interview, Cebu City Mayor Edgardo Labella said he was open to the idea of using city government funds to acquire COVID-19 test kits, especially those developed by scientists from the University of the Philippines (UP).

“We are definitely planning to purchase test kits,” said Labella.

The mayor disclosed to members of the media that the city council, with majority of its members being political allies, were also open about using P300 million worth of calamity funds set aside by the city government.

“We have already requested P50 million (since January) when we declared a state of preparedness. In the event that there is a need to ask for supplemental budget, I’m grateful for the city council on expressing their support,” Labella said.

In earlier press conferences, the Department of Health in Central Visayas (DOH – 7) announced that they have requested no less than 500 COVID-19 kits.

The Vicente Sotto Memorial Medical Center (VSMMC), a DOH-managed hospital, was identified as sub-national level testing laboratory, which meant they were capable of administering COVID-19 tests.

Labella also said they would look into the proposal from council members belonging to the Bando Osmeña Pundok Kauswagan (BOPK) to put up quarantine facilities at the South Road Properties (SRP).

Meanwhile, the city government is still awaiting confirmatory results of the 27-year-old patient suspected of having COVID-19. The patient died on March 15, 2020 after succumbing to pneumonia.

Labella said the patient’s remains were cremated, as per request from city health officers.

“We have asked permission of the family, and they gave us the go signal. Our health officers decided to cremate her even if we’re still awaiting results to know whether or not she contracted the virus,” he added.

Cebu City is now under community quarantine, which means border controls are placed under heightened alert to monitor travelers accessing the city as a precautionary measure on COVID-19./dbs