Desalination plants to be functional by 2021 — MCWD 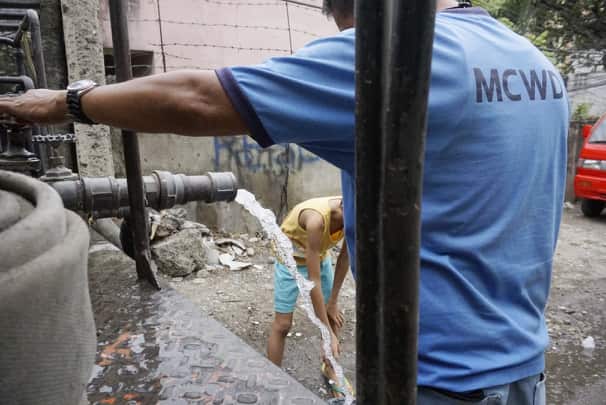 The answer to the water supply problems of Metro Cebu lies on the firm’s desalination plants which will be operational by 2021. | CDN file photo

CEBU CITY, Philippines — The water supply problem in Metro Cebu may find some relief in the year 2021 as the Metropolitan Cebu Water District (MCWD) expects functional desalination plants by then.

Lawyer Jose Daluz III, the chairperson of the MCWD, that the desalination plants would be functional in six months by the time it would start construction and would be completed in two years.

“It will be fully completed in two years, so it’s like a long term solution. But this will provide 150 million liters per day (mld), it will really be sufficient for our supply,” said Daluz.

Daluz said this would cover the supply-demand gap between the consumers of MCWD and the supply of water.

In total, Metro Cebu demands 500,000 cubic meters per day, but not all households or establishments source their water from MCWD.

If the desalination plants are completed, the service supply of MCWD will be raised to at least 375,000 cubic meters per day, which is more than enough to cover the demand of its consumer, and can allow the new connections as well.

A private firm, CitiCore Summa Water, is developing the desalination plants and will be providing for the island of Mactan easing the supply problem in the area.

Two plants will be built in Barangay Marigondon and Barangay Punta Engaño.

The South Road Properties is also being considered for another desalination plant source as Pilipinas Water Resources Incorporated (PWRI) already begun desalination in the area.

Currently, the production of PWRI is still limited to the SRP, but with the expected expansion in 2021, it may serve the other parts of the city too.

Desalination in other towns such as Talisay City, Consolacion, and Liloan are also considered although no concrete plans had been revealed yet for these areas.

If desalination plants begin supplying MCWD water, the utiltiy may have to pay P73 per cubic meter to the plants.

The consumers might feel a slight increase in their bills, but Daluz said they would be ensuring that establishments would pay more compared to households.

He said establishments in status quo pay only P36 per cubic meter, which would be far from the price of water in Manila reaching up to P118 per cubic meter.

The increase in payments from the establishments will help defray costs, and will allow a minimal increase in the price of water for individual households.

Currently, individual households only pay P152 for the first 10 cubic meter and an additional cost beyond that with a tariff of P48 per cubic meter.

Daluz said when the desalination plants would begin operation, this would increase slightly, but this minimal cost would mean more supply.

The MCWD has yet to compute the actual increase in consumer bills as they await the completion of the desalination plants. /dbs