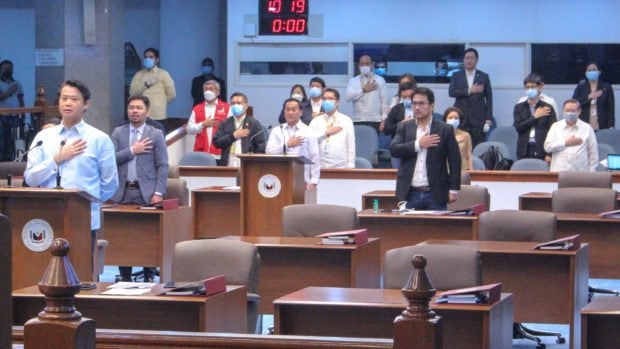 MANILA, Philippines — Congress has granted President Rodrigo Duterte special powers as the country faces a health emergency due to the coronavirus disease 2019 (COVID-19).

The House of Representatives adopted early Tuesday morning the approved Senate version of the bill or Bayanihan to Heal as One Act, granting Duterte special powers as the country faces a health emergency.

The bill would provide for an emergency subsidy for 18 million low-income families across the country amounting to P5,000 to P8,000 for two months.

It would also give public and private health workers infected by the virus a compensation of P100,000.

Financial aid of P1 million would also be extended to families of those who contracted the virus and died while on duty, effective retroactively.

Among the powers given to the President is the authority to realign available government funds to the address COVID-19 crisis.

Duterte was also given the authority to direct the operations of “privately-owned hospitals, medical and health facilities including passenger vessels and other establishments” when the public interest requires it.

The said establishments will be utilized for the housing of health workers and will service as quarantine facilities, medical relief and aid distribution locations.

Under the measure, the President may also direct the operation of public transportation to ferry health, emergency, and frontline personnel.

Duterte may also require businesses to prioritize and accept contracts to deliver necessary materials amid the health emergency and to expedite the procurement of medical equipment.

The Philippines so far has 462 confirmed COVID-19 cases and 33 deaths.

The World Health Organization (WHO) declared COVID-19 a pandemic since it has already infected more than 340,000 people worldwide and killed more than 14,000 mostly in China and Italy. (with reports from Christia Marie Ramos, Neil Arwin Mercado, Gabriel Lalu)

Read Next
The COVID-19 special power law: What it contains