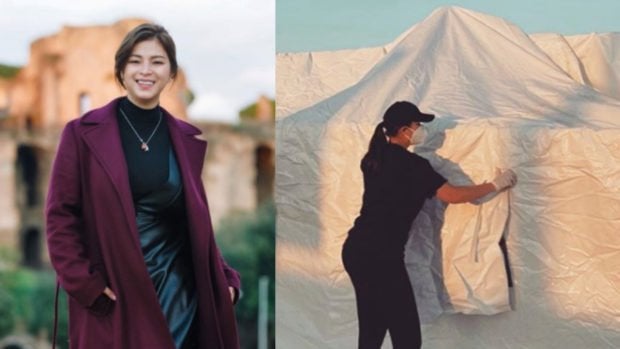 Almost a week after actress Angel Locsin and her team started the fundraiser UniTENTweStandPH, they have collected P3.7 million, as of writing, and is set to help 28 hospitals in and out of the metro.

Locsin, with the help of her fiance Neil Arce and her best friend, fellow actress Dimples Romana, began the crowdfunding initiative on March 25 to provide extra tents to hospitals facing overcrowding amid the COVID-19 pandemic. Romana expressed her gratitude to everyone who helped them raise the funds needed to set up the tents, as stated on her Instagram account yesterday, March 30.

“#UniTENTweStandPH as we continue to help one another to provide tents for hospitals to be used by our beloved frontliners and patients, heto po ang tatlong paraan kung Paano ninyo maaring ipaabot ang inyong tulong (here are three ways to send your help),” she said.

The “Kadenang Ginto” star advised the public on how to donate through the effort, via the online money transfer services PayPal and PayMaya or through a bank account under Locsin’s name in EastWest Bank. She also listed down the 28 hospitals which the campaign targets to help.

“[For] the past 4 days we have reached almost [4 million] pesos,” Romana added.

Locsin reposted the list Romana uploaded, adding that once they have finalized the arrangement and have set up all the tents for these 28 hospitals, they will cater to more requests with the remaining money they have.

Meanwhile, Locsin’s fiance Neil Arce recently defended the actress from a basher who claimed that her efforts are only a publicity stunt. Arce stressed that he believes Locsin has been successful precisely because she helps.

Locsin has been internationally recognized for her philanthropic work, namely for her efforts for relief and rehabilitation concerning the Marawi siege, and after the Ondoy and Yolanda typhoons. She was named one of Forbes Asia’s “Heroes of Philanthropy” last year, along with businessman Hans Sy, Indian tycoon Azim Premji and South Korean singer Lee Ji-eun. JB