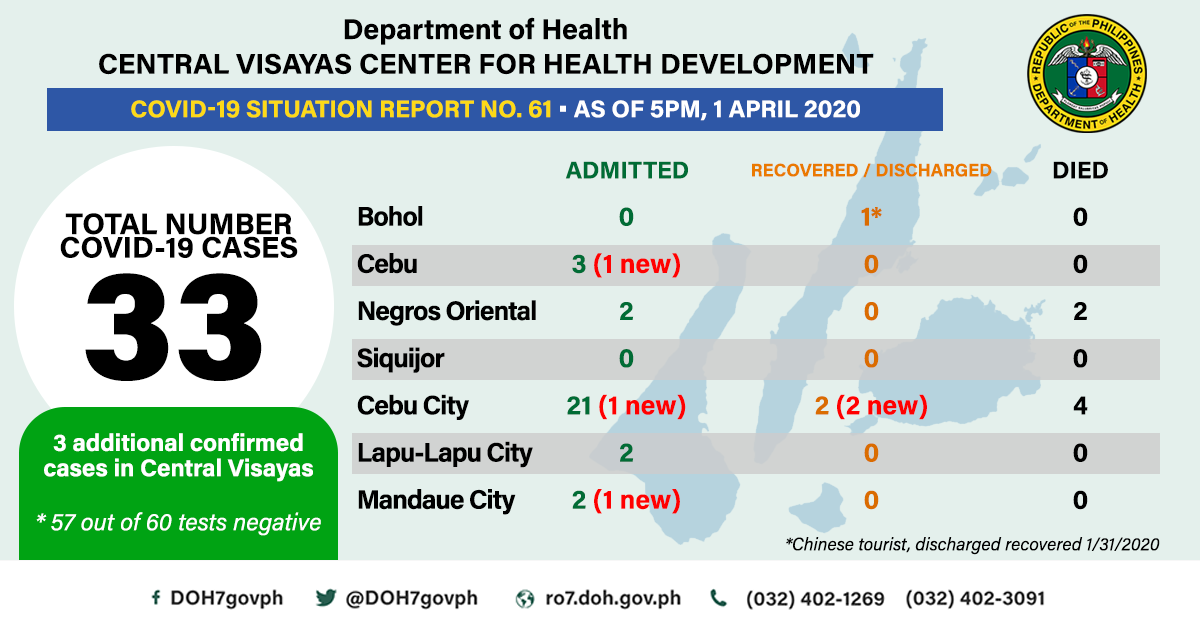 Mayor Joannes Alegado told CDN Digital that their first COVID-19 patient, a 54-year-old professional, has just arrived from a tour in the Middle East before he was tested for the viral infection.

Alegado said the patient, since his arrival last March 19, 2020, has already been under home quarantine along with his wife, who also traveled with him.

“Ni-travel man gud ni siya sa gawas from March 6 to March 19, to the Middle East, for a vacation. He came back last March 19 and automatically, gi-quarantine na siya. with his wife,” Alegado said.

The mayor added that he has already ordered for the “lockdown” of the subdivision where the patient and his family lives, for containment and disinfection.

While the patient is “up and above” and was only under home quarantine because he only displayed mild symptoms of the infection, Alegado said the family has opted to admit the patient in a hospital in Cebu City today, April 1.

Alegado added that the helpers of the patient and the driver who ran errands for the couple during their quarantine, as well as his family are already under home quarantine.

Earlier on Wednesday, the Department of Health in Central Visayas (DOH-7) announced that there are now 3 additional cases of COVID-19 in the region. Among these is the patient from Consolacion, one from Mandaue City and another from Cebu City.

According to DOH-7 Regional Director Jaime Bernadas, the new case in Mandaue City is a relative of the couple doctors from Talamban who both succumbed to the viral disease.

The patient, a 31-year-old man, came from Manila and had prior interaction with the two doctors.

Bernadas also said the patient has also been under quarantine.

According to the DOH-7 surveillance data, the patient is now confined in a hospital here.

This development brings the region-wide toll to 33 with 21 cases in Cebu City, 4 cases in Negros Oriental, 2 cases in Lapu-Lapu and Mandaue, 1 case each in Consolacion, Cordova, and Talisay City, and one case in Bohol.

The case in Bohol is PH-3, a Chinese national who has been discharged on January 31 and has already returned to China.

Meanwhile, the DOH-7 has also reported two more patients who have recovered from the illness in Cebu City.

Both patients have already been discharged.

The fatalities from COVID-19 in Central Visayas remains at 6, which includes four from Cebu City and two from Negros Oriental. /rcg