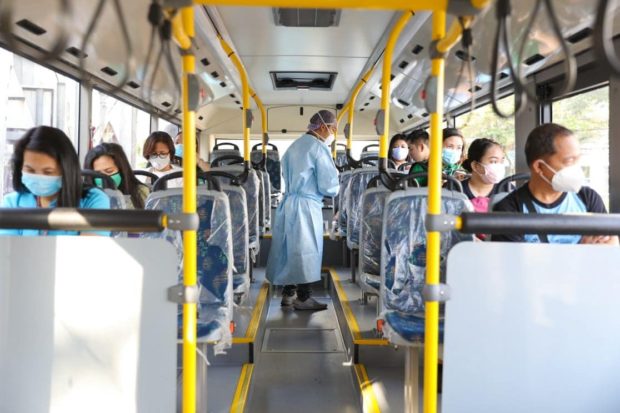 Free shuttle service for health frontliners in the battle against the spread of COVID-19. |OVP Photo

CEBU CITY, Philippines — The discrimination against frontliners such as medical professionals, health workers, and other people working to fight against the Coronavirus Disease 2019 (COVID-19) on the ground can now be penalized in Cebu City.

The City Council approved an ordinance authored by Councilor David Tumulak that prohibits any form of discrimination against the frontliners, to ensure their safety as they continue to battle the spread of the virus.

Tumulak said the Department of Health (DOH) has received various reports regarding discrimination against the frontliners such as being refused basic services like public transport and laundry service, refused entry to supermarket or grocery stores, or being evicted from their lodging houses and apartments due to the fear of contamination.

“Instead of discrimination, fear and hate against the frontliners, they deserve to be treated as modern-day heroes as they put their lives at stake to respond to the public health crisis and thus need the support and protection of the government,” he said.

In the passed ordinance frontliners are defined as medical and non-medical personnel, whether from the private or public sector, who are on the frontlines in provision of essential services in the face of public health crisis, such as:

These personnel cannot be denied access to establishments because of the nature of their work, kicked out of their apartments or lodging for being frontliners, and other forms of discrimination.

Her is how the ordinance defines discrimination against frontliners:

While third or multiple offenders will be fined P30,000 and will face criminal charges in court.

The ordinance is now awaiting the signature of Mayor Edgardo Labella for it to be implemented. /rcg

Read Next
Creative and Socially Distant Celebrations Around the Globe