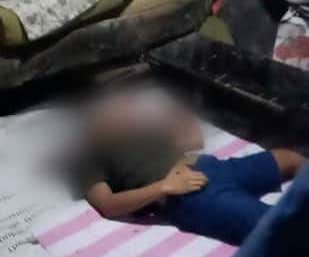 A 19-year-old boy lies dead after allegedly being shot by a friend over a card game in Barangay Inayawan in Cebu City on Friday dawn, April 3, 2020. CDN Digital photo | Paul Lauro

CEBU CITY, Philippines — A disagreement over a simple card game allegedly led to the killing of a 19-year-old boy in Sitio Campo Drive, Barangay Inayawan here on Friday dawn,  April 3, 2020.

Police Corporal Jaymus Todios of the Pardo Police Station said the victim, identified as Fernando Fernando, who is from the village where he was killed, was shot dead inside the room of his close friend and suspect identified as a certain Jerico.

Initial investigation revealed that the victim and the suspect had a disagreement over a game of “tong-its,” a rummy type of card game popular in the country, before the shooting happened.

Todios said that witnesses living near the crime scene already noticed both the victim and the suspect fight over their card game since late night of Thursday, April 2. Hour later while preparing for breakfast, they heard a single burst of gunshot.

When the witnesses checked inside the room of the suspect, they saw Fernando already lying bloodied on the floor. The suspect, on the other hand, had quickly escaped through the backdoor, heading towards a wooded area at the back the house.

As of this posting, members of the Pardo police are tracking the whereabouts of the suspect.

Investigators are also waiting for the Scene of the Crime Operatives (SOCO) team to arrive in the area to examine the crime scene. /bmjo